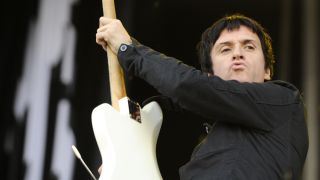 Johnny Marr, his signature Fender Jaguar guitar and his impossibly cool haircut are all in fine form in the video of his new song Upstarts, which you can view above.

Marr has already premiered a couple of cuts, along with a video for the title track, of his forthcoming album The Messenger, but Upstarts is the disc's first official single. The full-length album drops 26 February.

Since leaving The Smiths, Marr has played with a variety of other bands, such as The Pretenders, Modest Mouse and The Cribs. The Messenger is the guitarist's debut as a solo artist.

Describing Upstarts to Stereogum, Marr said that it's a "lighthearted description of leaving school and getting screwed and not knowing enough to engage in some productive political discourse but still being wise enough to throw up your middle finger and say 'Fuck you.'"