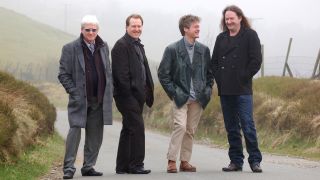 "It was in the spirit of Barclay James Harvest, a total collaboration."

You have to go back to 1999 to find the last John Lees-fronted Barclay James Harvest studio album.

Content with the band´s back catalogue, and disenchanted with the era of illegal downloads, frontman Lees toured his Barclay James Harvest (a second version of the group headed up by bass player Les Holroyd is also in existence, but more on that later) for over a decade without new material. Until, that is, he was swayed by original BJH keyboard player Stuart ‘Woolly´ Wolstenholme to pen a batch of new tunes.

The songs were to form the basis of new record North, although tragically, Woolly wouldn't see it come to fruition. The 63-year-old took his own life in December 2010, leaving Lees and bandmates Kev Whitehead (drums), Craig Fletcher (bass) and Jez Smith (keyboards) to battle on without him. And that´s exactly what they did.

They got to work, recording the record as a collaborative foursome over evenings and weekends. Teh band are currently touring North up and down the UK, and we called John to find out how it all came together...

It´s been almost 15 years since the last album, why was now the right time to get back in the studio?

“When we did [1999 album] Nexus, Woolly and I were contracted to do another album. I was a bit disenchanted with everything to do with my back catalogue regarding peer-to-peer and downloads and everything like that. I think people like myself were treated really unfairly in the first instance by the record companies, mainly because we didn´t have any download clauses in the contracts. It wasn´t on the horizon and it didn´t really exist. I sent the money back to the record company and told them I wasn´t ready to do anything.

“Shortly after that I turned the project into a partnership so that Craig, Jez and Kev became active members on a share basis. We continued to work with the old material. There were always new ideas around, I kept a sketchbook of new ideas.

"A few years later Woolly became ill and took his own life. We could either just pack it in or carry on. We had to carry on, we weren´t going to throw the towel in. Jez stepped up to the mark and took over the keyboards. There was no replacement for Woolly, so why bother trying? At that point I realised Jez, Craig and Kev deserved more and we needed to hang our hat on something new.”

And you were keen for the other members to have their voices heard, weren´t you?

“I was determined that it wouldn´t be me writing material and them playing it. It was in the spirit of Barclay James Harvest, a total collaboration.”

Was it a difficult album, emotionally, to put together?

“Not emotionally, it was a pleasure because the other guys grabbed it and got fully involved. Technically it was difficult because we went into an analogue studio and retrofitted it with our digital gear. That was quite challenging.

"We wanted to retain the analogue front end in the studio, which was built around a Trident desk and we ran that into Logic and Apple computers. The other challenge was that everybody has another job so we were recording in the evenings and at weekends.

I´m so proud of it. If this album doesn´t sell a single copy it would have still been a success for me because of the change I´ve seen in the band. In terms of guitar, there was some recording of the guitars through a cab, but we mainly went through the computer which is what I do on stage as well. It was a Parker Fly and Line6.

It was certainly collaboratively written then?

"From what I can remember of the early Barclays, that was how we worked. We´d meet up at the farmhouse and throw around these ideas and half of one person´s idea would go into half of another person´s idea to form one song. They were always the best songs that we did, the musical collaborations.”

Was it important to retain that collaborative spirit of the original band?

“It is important. That was progressive music as we knew it and that is the genre we hang our hat on. This is progressive with us trying new ideas. It´s quite eclectic but it sits as a whole under that banner. It´s difficult for us to move away from Barclay James Harvest´s remit because that is what the music is known for.”

There´s currently two versions of Barclay James Harvest out there, can that be confusing for fans?

“When the band split originally our manager came up this idea that people would need to use the name because we were known collectively rather than individually. So, he came up with the idea that it should be Barclay James Harvest Through The Eyes of John Lees. That would have been nice, but then one member went out and used Barclay James Harvest Featuring…, so that threw it all apart.

Can fans expect to hear plenty of new material on the road?

“Yeah, hopefully they´ll have a bit of time to listen to it before the tour starts. It´s us moving forward. We´ll try to play as much of the new stuff as we can.

"It´s strange, everything went tits up with Woolly he had been the one that was instrumental in persuading me that we should do new material. For him to be the one pushing for new material and then not be on the scene was staggering and took some getting over.”

John Lees' Barclay James Harvest is on tour now at the following venues:

North is out now.