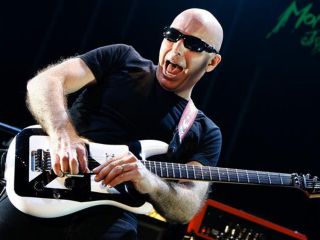 For Satriani, Hendrix's death was a rebirth - his own (Image credit: JEAN-CHRISTOPHE BOTT/epa/Corbis)

"The day Jimi Hendrix died, I can still remember it like it was yesterday. It was a beautiful day in suburban Long Island. I was 14 years old, I was on the Carle Place High School football team, and I was standing outside the gym, all suited up and ready to go onto the field for practice. Everything was right in the world.

"Suddenly one of my teammates came up to me - he had just been home for lunch so he saw the news on TV - and he said, 'Hey Joe, you know that guy you like so much, Jimi Hendrix? I heard he just died.'

"I'm pretty sure I was about the only kid in school who knew who Jimi Hendrix even was. Through my older siblings, I was getting turned on to all the great music that was happening at the time, and I really loved Hendrix. So this kid, my teammate, thought I should know.

"The minute he told me, my whole life flashed before my eyes. I don't think this kid expected the impact it would have on me. It was such a blow. I was devastated, shattered, in a fog of emotion. Without so much as taking another step towards the field, I turned around, went back into the gym and I told my coach, 'Jimi Hendrix just died, and I'm quitting the team to become a guitar player.'

"I was anticipating an argument - the coach was a former marine and a pretty tough guy - but he just stared at me. Maybe I looked so crazy or despondent, I don't know, but he simply said, 'Well, all right. Go right ahead.'

"Telling the coach was one thing. Later that evening, I had to tell my parents. We were a large family of seven. Dinner was progressing normally, the usual conversations, until I said basically the same thing I had told my coach: 'Jimi Hendrix died today and I'm going to devote my life to playing the electric guitar.' There was a long moment of awkward silence, as you might expect, which was followed by a lot of lively discussion.

"My family was sort of used to me saying crazy things, but this time I think everybody knew I meant it; that I had actually decided on a course for my life, so much so that my older sister, Carol, who had just started teaching art in school, said that she would donate her first paycheck towards getting me an electric guitar so I could begin my new life as a musician."

"It's funny: I had already toyed around with the drums, but it was pretty clear to me that I was a terrible drummer. Same with piano - we had a piano in the house and I banged on that a bit, but there was no magic; whatever it took to be a great pianist, I didn't have it.

"But when I heard that Jimi Hendrix died, it was a defining moment for me. Something told me that I had to try to pay tribute to him somehow, and the only way to do that was by becoming a guitar player, a great guitar player, and for some reason, I knew I could do it.

"I wound up getting that guitar with my sister's first paycheck. It was a white Hagstrom 3 with black detail. I didn't know anything about guitars at the time; I didn't know what a Fender Stratocaster was. To me, the Hagstrom looked like a Jimi Hendrix guitar. It was $120 and I was absolutely thrilled to have it.

"Once I got it home, of course, I immediately realized the horror that playing the guitar was not going to be easy. Back then, there were no instructional DVDs, no tapes, no YouTube, none of the things that exist today to make learning the guitar easier. The only music books were these Mel Bay things that were very confusing. It was discouraging. For a while, the path I had chosen didn't seem so rosey.

"All I had was myself, my Hagstrom, a reel-to-reel tape recorder that I used as my first amp, and that was it. Every bit of progress I made on the guitar was through sheer determination.

"You would think that my parents would have tried to stop me, but they seemed to realize that my dedication to the guitar was unstoppable. And it all came from Hendrix. I even had a ritual: I would go into my room, light a candle to get into my 'Jimi Hendrix vibe' and I would practice and practice and practice. Before long, I grew to love the work. I loved that playing the guitar wasn't easy. It was pain, but it was my pain. And then it became joy. My joy.

"Here's something weird though: I loved Jimi's music so much that I would never perform it for people. Throughout my teens and playing in various bands, I refused to play Hendrix songs. I know that sounds strange, but Jimi's music was so special to me that it was like works of art that shouldn't be touched or altered. I didn't want to defile his magic in any way."

"It wasn't until years later, when I went to Japan - I was around 20 years old or so - that I joined up with a Japanese Hendrix tribute band. I saw them playing in a club one night, and I thought they were pretty good, but something wasn't quite right. They just weren't 'getting it.'

"So I ended up talking to them - there was something of a language barrier, but we got past it - and I took out my guitar and I showed them some stuff and they took me on. That was the first time I ever played songs like Little Wing live. It was so liberating! Maybe I had to go all the way around the world to discover that I could play Jimi's music without ruining it. It's crazy how things like that happen.

"I've picked apart Jimi's music and analyzed it so much over the years, and there's still things he did that astound and mystify me. When I watch footage of him playing at the Fillmore East, when he's playing Machine Gun, I'm blown away by his musical choices. And that's the thing: it wasn't about his gear, his guitar, it wasn't about what mic he was singing into it, it wasn't about anything but his own brilliance.

"I'm pretty sure you could have handed him any guitar and any amp and he would've blown the roof off the place no matter what. His impulses, his intuition, what he did one second to the next, how he moved his hands, knowing to play this note after that note…it was deep.

"If I had to pick an album that truly sums up Jimi Hendrix, to me it's Electric Ladyland. It's a double-album, but it's like lots of little albums in one package. Take Voodoo Child (Slight Return) - it's ridiculous how fantastic that song is. If anybody wants to play the guitar, they want to play guitar like Jimi on that track. Talk about a performance that is so together. The tone, the intonation, the phrasing...it's spine-tingling.

"And then you have 1983...(A Merman I Should Turn To Be), I mean, what's that? He sounds like three guitar players on that song! Electric Ladyland has everything: great pop songs, wild experimentation and just out-and-out throwin' the guitar down like no one else. He really nailed it on that one.

"You know, at the end of the day, a guitar is just wire and wood, but when you can create sounds like Jimi Hendrix did out of those simple components, that's a remarkable achievement, and it's one worth remembering - and celebrating."

Joe Satriani is a multiple Grammy-nominated guitarist and songwriter, as well as a member of the band Chickenfoot.