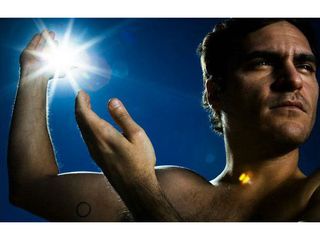 Actor Joaquin Phoenix wants to be known in the future as Musician Joaquin Phoenix. That's right - at the ripe old age of 34, the Oscar-nominated star is eyeing his last days in front of movie cameras in favor of standing behind microphones.

To a stunned reporter from Extra, Phoenix said, "I want to take this opportunity...also to give you the exclusive and just talk a little bit about the fact that this will be my last performance as an actor, I'm not doing films anymore."

With that, he stalked off. The same reporter then asked Phoenix's friend Casey Affleck if Phoenix was serious. A nervous-looking Affleck answered, "Yeah. I guess he's getting into music. He's going to put out an album, I don't know." He, too, bid a hasty retreat.

Here's the video clip of the incident.

Later, Phoenix clarified his initial statement: "I'm working on my music. "I'm done. I've been through that." The actor's rep confirmed that was his client's intention.

Phoenix has the chops

Having sung his parts as Johnny Cash in the biopic Walk The Line, Phoenix certainly proved he could carry a tune, even in character. And he has his musical supporters, such as Tim Burgess of The Charlatans, who has been working with Phoenix and describes the actor's songs as "brilliant."

Phoenix has one more film due for release, Two Lovers, co-starrting Gwyneth Paltrow. After that, he has no other film projects on deck.

Will the acclaimed actor make good on his threat to quit acting? Hard to tell. But one thing Hollywood loves is a comeback.