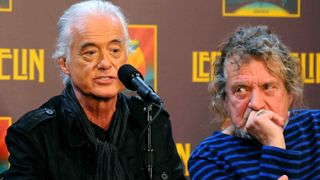 Jimmy Page has taken the stand at the copyright trial over allegedly nefarious similarities between Led Zeppelin's Stairway To Heaven and Spirit's Taurus.

Appearing alongside singer Robert Plant, the guitarist testified that he had never heard the song until a few years ago, when online comparison videos began to appear.

"I knew I had never heard that before," he said. "Something like that would stick in my mind. It was totally alien to me."

"When it started, I was confused by the comparison… [I thought], 'What's this got to do with Stairway?'"

Page initially admitted to owning two Spirit albums, neither of which contained Taurus. However, after further questioning he conceded that he does in fact also own a copy of the band's self-titled debut, which features the song in dispute, but had no idea how it ended up among his precisely catalogued collection of 4,329 records and 5,882 CDs.

The rock icon turned up to the trial carrying a guitar case, but sadly, didn't whip out a 12-string to play Stairway's iconic opening chords.

Michael Skidmore, a trustee for late Spirit guitarist and songwriter Randy Wolfe - AKA Randy California - brought the lawsuit. His lawyer, Francis Malofiy, referred to Page as "the alleged composer" of Stairway and claimed the band achieved fame by making other people's music their own.

Malofiy's case focused on interviews and US live dates around 1969, when Led Zeppelin shared the bill with Spirit - who played Taurus during their sets - as well as a 1970 game of snooker between Robert Plant and members of Spirit in Birmingham, UK.

Jimmy Page on the writing of Stairway To Heaven in 2014