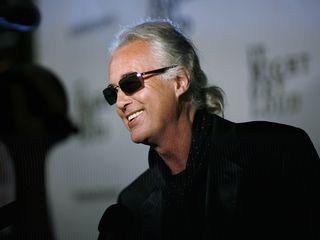 Led Zeppelin's Jimmy Page is being sued by folk singer Jake Holmes, who claims that the guitarist stole his 1967 song Dazed And Confused and reworked it on Zep's debut album two years later.

All of which begs the musical question: why in the world did Holmes wait so long?

The track Dazed And Confused did indeed appear on Holmes' album The Above Ground Sound Of Jake Holmes, which was released in 1967. That same year, The Yardbirds, which Page was then a member, opened for Holmes at a show in New York.

The Yardbirds were known for performing a song called I'm Confused, which Page later adapted for Led Zeppelin's 1969 debut album. (You can listen to and compare both Holmes' and Zep's Dazed And Confused below.)

This is not the first time Page or Zeppelin have been embroiled in a plagiarism lawsuit: Blues pioneer Willie Dixon successfully won a lawsuit over the song Whole Lotta Love, which the artist claimed borrowed from his song You Need Love, a track he wrote for Muddy Waters. (In later pressings of Led Zepplin II, the songwriting credits read 'Jimmy Page, Robert Plant, John Bonham, John Paul Jones, Willie Dixon.'

Whether or not this matter goes to court, due to the statue of limitations, Holmes can only sue Page for damages for the past three years. A whole lotta cash is at stake, sure, but not 40 years' worth.

So what do you think? Does Holmes have a case? Here's his 1967 version:

And here Led Zeppelin performs Dazed And Confused live on British TV in 1969: