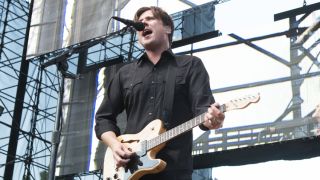 "If you have a happy song about how happy you are, I just want to slap you." They don't call Jimmy Eat World emo for nothing, y'know.

As MusicRadar speaks with the band's frontman and main songwriter Jim Adkins, it becomes apparent that, even eight albums in, Jim's work remains as emotionally intense as ever.

Damage, released on 11 June, is the latest long player from the Arizona-based rock troupe. Packed with richly-layered, acoustic-heavy tearjerkers and blessed with a smattering of hook-heavy pop rock hits in the making, the album stands shoulder to shoulder with Clarity, Bleed American, Chase This Light et al.

As Jim explains, it is a record that's full of maturity, weirdo drums and, yup, you guessed it, heartbreak...

There seems to be a lot more acoustic playing on Damage than past albums. Was that a conscious decision?

"A lot of the album actually started out on acoustic guitar. A lot of the basic ideas started there as rough scratch acoustic stuff. I think when you're writing and recording you're always reacting to what you're hearing. That's why a lot of the time people develop demo-itis. Nothing is as good as the first time you do it. I think we experienced that a little bit.

"On Damage, there's a lot of acoustic guitar going on, even in songs that are big and dynamic in a rock sort of way. We would try other things, like we tried I Will Steal You Back without an acoustic, but it just didn't feel right."

Is that just a sign of how the band has evolved?

"That has always been a round a little bit, but as we get older and older we get more acoustic. That's just how it goes, you can't fight it."

You recorded out in LA with Alain Johannes this time. What made you decide to go that route?

"We wanted to work a little bit differently this time. We made the last two records in our rehearsal space in Arizona and recorded a lot of it on our own. A lot of the time we would have producers in a different state so we would trade tapes online to get feedback. This time we wanted to get into a 24/7 environment and do it."

And how about working with Al Johannes?

"He's an amazing solo artist. We met him and he just had the best ideas. For what we wanted to do he felt like the right guy. We have a better idea of what we want now, so we didn't need someone that was heavy handed. We wanted someone to be more like a partner, an ideas guy with fresh ears. You can get lost sometimes hanging onto a cool part, even if that cool part is messing up the rest of the song. It sometimes takes someone with an emotional investment to point these things out."

He joins an illustrious list of producers that you have worked with - Mark Trombino, Gil Norton, Butch Vig…

"It's like you just showed up at school. It's a huge opportunity to learn about writing and pick their brain. It has been an amazing experience to work with these people, and why not do it? We've approached this crazy opportunity to make music as just that, a crazy opportunity. So if we can get into the studio with Butch Vig or Gil Norton or Mark Trombino, why not?"

Lyrically you are a band that fans have enjoyed a strong connection with. Did that make the task of writing lyrics for Damage a little daunting?

"Man, writing lyrics is a bitch! It's important - you don't have a song if you don't have a story. Lyrics are the song. I can't tell you how many ideas for music I have laying around that for one reason or another I can't finish the lyrics for. It can be cathartic, it can be anything. I've experienced catharsis and I've also experienced complete ease of just, 'chug, chug, chug, chug... oh, there's the lyrics. Done.'"

Does that fan connection ever play on your mind - knowing that people will scour your lyrics for meanings and connect with them on a personal and emotional level?

"I don't think a lot about that. I think when you're writing you have to be honest with yourself about what you find rewarding and challenging. You can't stop until you have something you're proud of. To do that you can't chase any type of listener.

"If you're chasing the approval of anybody you're going to come out with something diluted. When you make something you're proud of and people find something in that, that is the biggest compliment. If you do chase it and it doesn't elicit that response from people, that's digging yourself into emotional and songwriting despair."

Did you have a lyrical theme in mind for Damage?

"I got really into the idea since Invented of having a theme for a record. Just some basic point you can jump off from. With Damage the point was love songs. But the type of love songs that interest me deal with adversity and emotional injury. If you have a happy song about how happy you are, I just want to slap you. There's no story there for me. I can't have any empathy."

You mentioned earlier that a lot of the album was born out of acoustic guitar. Do you have a go-to acoustic?

"I used whatever was around! I play a lot of Australian guitars. I have a Maton and a Cole Clark. A Maton that is a concert-style body and the Cole Clark is more standard. They're both made out of Bunya wood, which is indigenous to Australia. It's like maple but it's not as bright as maple."

How did you go about fleshing out those original acoustic ideas?

"It happens many different ways. Sometimes the other guys will hear an idea and say it's fine as it is. You Were Good is just me and an acoustic. We experimented trying to piece that together as a band, but it's all about what a song needs.

"We've been working together for so long that we have a good sense of how we think and what our strengths are. A song can end up as just me and a guitar and some weirdo drum music."

How has your approach to songwriting changed down the years?

"For me, it hasn't changed at all. A lot of the time I'll mess around with guitar on a couch and find something that sounds good and that'll start an idea. Or I'll be in a studio and I'll lay down a drum loop - I'll always be dicking around on drums and record it and try to play guitar against that. I'm not a very good drummer but there's no pressure in that."

Will you lay down drums just to have something to work with and build a song from the bottom up?

"My drumming is ripping off what Zach [Lind] our drummer does. It's funny that at the end on some songs it'll be Zach playing a more professional version of me ripping off him! I'll get hands on with it. I can't help thinking, 'What if the kick pattern went like this?'"

What were you using gear-wise this time?

"I used my Fender JA90 and sometimes my acoustics. Sometimes a part might call for something weird. Al's place is like he has ripped off a crack house/music museum! It's got every kind of world instrument and strange guitar.

"Amps-wise it was a lot of AC30s. There's a Marshall head I've had for a long time that I know what it does. Marshall does a sound - if you want that sound, there it is. You can make a whole album with just one amp. We've gone down the route of AB-ing amps and I'm kind of over it. You make an informed guess based on your experience in regard to what guitar and amp combination will make the sound that you want. We can usually make that work with the first guess."

For more information, visit the official Jimmy Eat World website or connect with the band on Facebook.