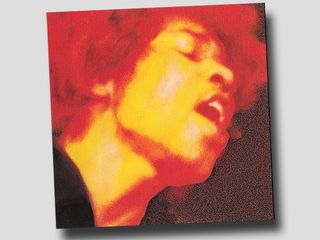 A bold and sprawling smorgasbord of rock, blues, soul, funk and psychedelia, Electric Ladyland is still considered the crowning glory in the canon of the world's greatest-ever guitarist.

To commemorate 40 years of Electric Ladyland, MusicRadar presents Jimi Hendrix Week. Over the next seven days on MusicRadar, we'll give you playing tips, audio and video lessons, some insight on free software to help you get Jimi's sound, a poll on the greatest Hendrix tracks and much more.

And to start, MusicRadar presents the memories of Jimi Hendrix's right-hand man in the studio, the legendary producer/engineer Eddie Kramer.

What was Jimi really like behind the wild man of rock image?

"He was great. He was one of the funniest guys I ever worked with, too. He was always taking the piss out of me, Mitch [Mitchell, drums] and Noel [Redding, bass], and himself. He had a lot of self-deprecating humour. And he was fast. He had an acerbic sense of humour - very cutting.

"Besides that, he was a very shy guy and he could only open up to you once he trusted you. I got as close as I could - as close as anybody could - in a working relationship. He trusted me, and I admired him and what he did so much that I was just really happy to be part of the crew."

Does that mean Jimi deliberately cut himself off from others when he wasn't working?

"Well, he was very private in that sense. His private life was his private life. I wasn't involved in that. This was a man who kept himself to himself… although he did have lots of girlfriends. He had a very active social life! My relationship with him stopped outside the studio door, to a certain degree.

"There were a couple of times when he was very friendly to me. If you go to my website, there's a gallery of my photography. There's this great picture of [Mick] Jagger and Jimi sitting backstage at Madison Square Garden. Jimi called me up - it was his birthday - and said, 'Come on, The Stones are playing Madison Square Garden!' So he picked me up and I dragged my camera along. It was a gesture that I never forgot; Jimi being very friendly.

"But, like I said, that was the exception rather than the rule. Our relationship was a very close one in the studio because we collaborated on lots of different sounds. He would come up with a sound on his amp and then I would re-interpret it in the control room. And he'd go, 'Wow! That was cool!' then run back out and try to top what I did. It was just some really friendly and inspiring competition."

Jimi was a very natural musician, but how aware was he of music theory - was he schooled in any way?

"Having said that, I would say his natural ability expanded into other areas. He listened to classical music, jazz… he was influenced by the many sounds around him. He just absorbed everything around him. He always said that his music had a much larger capacity - for strings and all that sort of stuff. He was thinking about a larger palette."

Was he different in the studio?

"Yes. Jimi was in charge in the studio, there was no question about that. Yes, shy and self-effacing; that was the character that was presented to the general public. But he was a thinker, too. He really did think deeply and I think that he was affected by the politics of the time, which was obviously reflected directly in his music. But he was very much in charge in the studio.

"The relationship with Chas [Chandler, Jimi's manager and producer of his first two albums] changed during the recording of Electric Ladyland. Jimi became very much in charge. This was Jimi's album. This was Jimi's session. And from that point on it was Jimi in charge. He had a very clear vision of what he wanted.

However, he often turned to you for certain effects in the studio…

"Jimi would walk into the studio, have his amp set up and start playing, and I would hear something and immediately I would start manipulating the sound; try to make it better or different, or try to be creative with it. I think what he appreciated was the fact that I wouldn't just stick a mic up and hope for the best. We were experimenting - I was young! We were the same age, in fact.

"But, at the same time, we were dabbling in areas that had never been tried before, like stereo flanging. Every day we were trying something new, because we didn't have much technology at our disposal. We had tape delay, EQ, reverb and that was pretty much it. There wasn't much out there at the time. It was how you placed the mics, how you used the room, a little bit of a Leslie effect, a little bit of flanging. The flanging thing was a revelation for Jimi.

"Every day was a nice challenge. In English studios we only had four tracks, whereas in the States they had eight. We were so jealous of the Americans, so we had to be really creative. How do you get eight tracks? Well, you take a 4-track machine and another 4-track machine, record your first four, then you make a mix of the four and dump that onto the second machine, so you end up going four groups of four to four new tracks. That forced you to be careful with your mix, because the mix that you did was your final mix.

"So every step of the way, it forced you to be very creative and to get your sounds right there. Today it's the opposite: you leave everything wide open and then you make a decision.

"Each successive generation of young kids I've watched over the last 25-30 years, who's the guitar player they go to first? They go to Jimi every time. He's the man. You can't help but be influenced by him."

Tomorrow, we have tone tips on Jimi Hendrix's guitar sound.