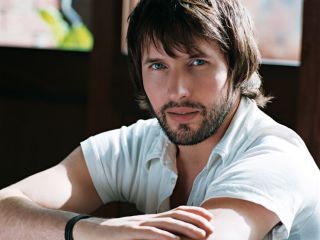 James Blunt - even a doctor agrees his fingers need breaking.

The music world juddered today when it emerged that British crooner James Blunt´s finger injury threatened to stop him playing piano for good. Blunt hurt his finger when he jumped into the crowds at a gig in in North Carolina in April - yes, James Blunt went stagediving. The balladeer has now revealed he needs his finger to be rebroken and set again if he´s to continue to play the piano.

"I need it to be right but the idea of having them take a hammer and smash my finger into two isn't so thrilling," Blunt said. "It was a funny moment being chased, but when I got back on stage it was nerve-wracking looking down and realising the finger was pointing the wrong way. Upon reflection, it was dumb to jump into the crowd, but in a way it was my own fault. I had leather soled shoes on and just slipped."

Other guitarists have suffered similar musical misfortune, some temporary, others all too permanent. Just some of the events MusicRadar can recall are…

1. Muse´s Matt Bellamy headbutting his guitar and knocking his teeth out mid-show.
2. Supergrass´s Micky Quinn sleepwalking out of a first floor window and actually breaking his back. Thankfully he made a full recovery for Supergrass´s new album.
3. In 1997, Neil Young having to cancel a Glastonbury appearance after slicing his hand while attempting to make a ham sandwich. Tough ham!
4. Jimmy Page falling over in his garden, breaking his finger, and delaying Led Zeppelin´s 28-year awaited reunion gig.
5. David Bowie halting a gig in Oslo in 2004 when a lollipop thrown from the audience ended up stuck in his eye. Ouch!
6. The Yardbirds´ frontman Keith Relf died aged 33, when he was electrocuted by improperly-grounded electric guitar at his home. Rumours that Relf was playing his guitar in the bath were strongly denied by his family.