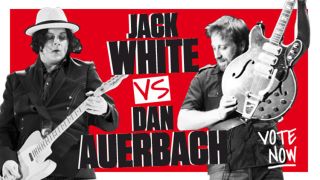 In a battle that can only be described as the musical equivalent of Rocky IV (we'll let you decide who is Ivan Drago), two titan of modern blues have been going head to head for the hearts and minds of music lovers everywhere.

Yes, that's right, former White Stripes riff juggernaut Jack White and Black Keys' retro-loving guitar hero Dan Auerbach have been having it out in the press, and we're setting out to settle once and for all who wins in the ultimate modern blues-rock face off.

So which side are you on? Auerbach or White, it's time to decide. Cast your vote below and let us know who flicks your bluesy switches.

Who is the most important blues-rock guitar hero of recent years?