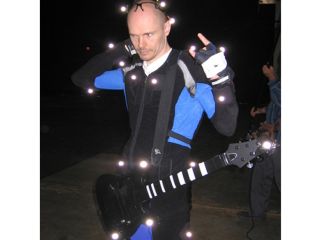 Corgan gets wired for Guitar Hero

Billy Corgan is most definitely a hot player, but is he a Guitar Hero? From all indications, he is. The Smashinig Pumpkins guitarist appeared on a leaked list of artists that would be on the upcoming Guitar Hero: World Tour.

Now we have more proof: A photo of Corgan in a motion capture suit, the very kind worn by performers whose body movements are being tracked by filmmakers and game digital artists. Coincidence? Uh...yeah.

Other artists that may be showing up in pixelized form in Guitar Hero: World Tour are Ozzy Osbourne, Paramore singer Hayley Williams, former Blink-182 drummer Travis Barker, Jimi Hendrix and Sting. (A photo of Ozzy in a motion capture suit - now, that's something we have to see! But how will they track Hendrix?)

In other gaming news, a pantload of The Who is coming to Rock Band. It won't be Who's Next, as was speculated, but the week of July 15 will see the release of a steller collection of classic Who cuts. The Who's website has announced the full list of tracks to be included in The Best of The Who Rock Band Edition pack:

Word of advice: Don't smash your game controller. Pete Townshend gets his replacement guitars for free. You won't be so lucky.