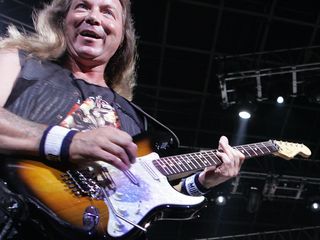 According to guitarist Murray, going boldly into The Final Frontier was "a breeze" (Image credit: Katy Winn/Corbis)

When Iron Maiden convened at Compass Point Studios in the Bahamas (where they cut their classic album Powerslave) to record The Final Frontier, their 15th studio effort, you might think that the lush tropical setting would make the legendary British band kick back a bit.

Nothing of the sort. According to guitarist Dave Murray, the sextet "breezed through the album, really. We actually finished it in six weeks. We were getting down a track a day - all playing together as a band, Bruce [Dickinson] singing, all in the same room, so there's a very live-in-the-studio feel to it. Once we finished a track, we'd jump straight into doing some extra guitar bits. It was very quick for us."

Produced by Kevin Shirley, The Final Frontier is chock full of "straight-ahead, uptempo rock songs with good grooves with some other tracks that are kind of longer and more complex."

Murray is no doubt referring to When The Wild Wind Blows, an 11-minute opus that ranks as one of the longest songs Iron Maiden have ever recorded. "The rhythm's a little bit different from what we've done before, and there's lots of melodies," the guitarist says. "It's a big song. We learned it in sections just because it was such a complex arrangement, but it sounds quite natural."

The Final Frontier marks the longest gap in Maiden studio albums (their last was 2006's A Matter Of Life And Death), but Murray says that because of other side projects, such as the hugely successful documentary film Flight 666, the band didn't feel the passage of time. "There was still a lot of stuff coming out from the band, so it doesn't feel like four years," he says. "I guess time flies when you're having fun."

The Final Frontier is set for release on 16 August. The first single, El Dorado, is available for free download at www.ironmaiden.com.