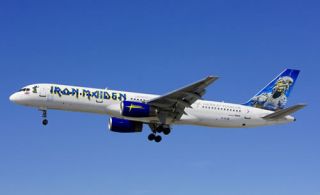 Flight 666 will get a DVD release next month

Iron Maiden tour documentary Flight 666 will get a DVD and Blu-Ray release next month.

The film is screening in cinemas worldwide from 21 April and the DVD will be in shops on 25 May. Included in the DVD package is a second disc of live performances, of sixteen songs in sixteen different venues. A double CD soundtrack will also be released at the same time.

Flight 666 documents the opening leg of the band's Somewhere Back In Time world tour in February and March last year, through Asia and Oceania.

On the tour the band rented their own Boeing 757 which frontman Bruce Dickinson piloted. Iron Maiden played live in a staggering 24 different countries in just a six week section of the jaunt and over the whole tour played to over two million fans.

A list of locations where the film is being screened in cinemas next week is on the band's website.