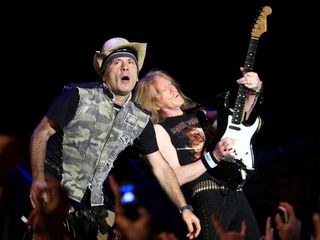 Ready for some Eddie? Hope so, because Iron Maiden have announced that they have a new album, The Final Frontier, planned for late summer release. But before that, they're going to hit the road in the US for an extensive tour, with Dream Theater confirmed as 'special guests.'

While offering no details as to the sound and direction of the new album, vocalist Bruce Dickinson is effusive as to the tour: "We really wanted to get out and play some shows before the release of the new album later this year, so we thought what better way to kick off the tour than by going back to Canada and the USA where fans gave us such a fantastic reception during our last tour in 2008!

"We were astounded to see so many thousands of fans packing out the venues," he continues, "so this time round we will be playing a few more cities we haven't visited for some time, like Dallas, Saskatoon, Detroit, Denver and Pittsburgh, though logistically we couldn't get to a few places we really like to play, which is a shame. It's also great news that our friends Dream Theater are able to join us as special guests."

Dream Theater's Mike Portnoy echoes Dickinson's enthusiasm on the pairing of the two bands: "Touring with Iron Maiden in North America is a bit of a dream come true for us! After 25 years together, at this stage in our career, there's honestly only three bands Dream Theater would consider opening for...and Maiden is one of them! It is an absolute honor.

"Through the years, we've done many one-off shows with Maiden and they've almost all been overseas, so it is very exciting to finally be doing a full tour with them - and on our side of the pond no less! This is gonna be an amazing show that the fans won't wanna miss...Up The Fucking Irons!"

The tour is scheduled to start on 9 June in Dallas, Texas and wind up in Washington DC on 20 July. For more details and ticket info, visit ironmaiden.com.