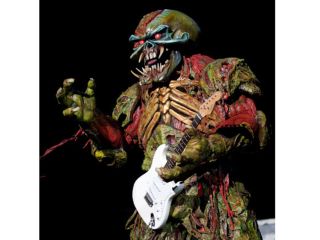 Iron Maiden kicked off their eagerly awaited, sold-out Final Frontier Tour last week in Dallas, Texas to a riotous reception. But the crowd was in for something of a surprise as the three-guitar band added one more axeman to their lineup.

In occurred during the final song in the main set, Iron Maiden, as the band's beloved mascot Eddie stepped into the nimbus of stage lights and strapped on a white Stratocaster. (See the video below.)

Whether or not the band's dedicated guitarists (Dave Murray, Adrian Smith and Janick Gers) were intimidated by Eddie's mad shred skills remains a mystery. Being that the hulking, magnificent beast stands 12 feet tall, we're willing to bet they gave him a wink and a "thumbs up" backstage.

As of this writing, Iron Maiden's 16-song setlist is light on the hits - the group is going for deep cuts, so don't expect Run To The Hills or Aces High. But they did debut a new song, El Dorado, from their forthcoming album The Final Frontier, which will be released in August.