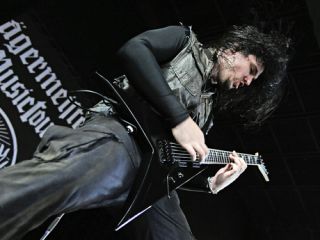 With their new album In Waves debuting in the upper regions of the charts worldwide, the Florida-based Trivium have firmly established themselves as one of the biggest heavy metal bands on the scene today.

"It's so exciting," says guitarist Corey Beaulieu. "The reaction to the record has been phenomenal. Our fans really seem to be digging it, but of course we're looking to win over a bunch of new listeners, too. We've got our fingers crossed, but we know we have a lot of work to do."

Already hailed for such groundbreaking works such Ascendancy (2005), The Crusade (2006) and Shogun (2008), Beaulieu and the other members of Trivium - frontman and co-guitarist Matt Heafy, bassist Paolo Gregoletto and new drummer Nick Augusto (who replaced longtime sticksman Travis Smith) - took more time than usual in crafting In Waves.

"We were very conscious about making this album count," says Beaulieu. "Not that the other ones didn't. But the time comes for every band to really make their mark, and that's what we did with In Waves."

MusicRadar sat down recently with Corey Beaulieu to talk about the writing and recording of In Waves, as well as working with the band's new drummer. In addition, we asked the guitarist how he manages to scream his lungs out every night...and his response was most surprising, to say the least.

How has it been playing with Nick Augusto?

"Really, really great. Nick started playing with us in late 2010. I think what really helped us all out was that we were able to play with him live before we made this record. He got a chance to get used to us, and we were able to feel comfortable with his style. He fit in very quickly.

"Nick's drumming skills are phenomenal. He can play all the super-fast double bass patterns, blast beats - all that stuff. Going into writing the record, we had a lot of things sketched out, but we found that we could take songs as far as we wanted because of his abilities."

What were the problems with Travis Smith, and what led to him leaving the band?

"The chemistry really wasn't happening between the four of us. Travis didn't seem very interested in what we were doing anymore. He had talked about leaving the band, and after a while it seemed as if his performances really weren't there. He wasn't giving his all. I think he was just unhappy.

"At one point, he said that he was going to sit out a tour. That's when we called up Nick, who Paolo knew and had played with. Actually, Nick was a drum tech for Travis for a while."

So Travis' drum tech wound up replacing him?

"Yeah. Travis had fired him. Isn't that strange? But Paolo said he was a great drummer, so we called him back and played with him, and we were like, 'Holy shit. This guy fucking rules!' It's one of those weird stories, but in the end everything worked out."

Matt has said that In Waves isn't a concept record, but there is a theme. Can you expound on it?

"We wanted to create a vibe and an atmosphere. From the photos to the album art to the music videos, we definitely wanted to present a look and a feeling that people would hold onto when they listened to the record. So it's not a 'concept' per se, but there's definitely a theme. We kind of take you into this world, the way a movie does."

The band bookends the album with instrumentals, Capsizing The Sea and Leaving This World Behind. Was that always the plan?

"Yeah, pretty much. We wanted an intro and an outro. For the outro, we took elements of the song Dusk Dismantled and screwed around with them and made them different. We experimented a lot. Matt had a lot of ideas to create these cool vibes."

The first solo in the song In Waves - is that you?

Let's look at that song as an example of how you and Matt divvy up solos. How do you go about working out who does what?

"I guess you can look at that one as how we work. I have a certain way of how I like to play solos, and Matt has his way. I try to add new little licks and tricks and go kind of crazy in my solos. Matt isn't into being a super shredder. He likes to write simple, pentatonic, old-school solos, and he's really great at that.

"You can definitely hear the difference in our styles. If there's a weird rhythm part that calls for a super-shred solo, I'll probably take that. If it's a part that calls for something more melodic, then Matt will be the guy for that. We each have our strengths, which is cool, because if we both had the same kind of style it would get pretty weird."

Dusk Dismantled has quite a few monster riffs.

"Yeah, it does. Matt brought that song in and he had a couple of riffs already planned. I had a middle riff which was going to be part of another song, but it worked well for that one. Riffs are funny things - there's no set rule for how they come about. We do a lot of layering and working on harmony parts in the studio. Riffs will start out one way, and by the time we're done recording they can be quite different."

You're known for your screaming in Trivium's songs. How on earth do you protect your voice?

"Well, the answer is...I don't! [laughs] Protect my voice? Wow, I don't know. Before a show, Matt and Paolo will be backstage with their iPods, and they'll warm up singing and screaming notes. They definitely work on switching back and forth between the two extremes.

"As for myself, I never really learned any kind of vocal techniques. Basically, I just taught myself how to do it. I'll have a beer before I go out on stage, scream a few times, and then I'm good to go. I don't really warm up or anything. I just have a drink, let out some death-metal growls, and I'm ready."

So your secret is alcohol?

[laughs] "Yeah, I guess! Any kind booze works. Jager is always good, of course. On the Mayhem tour we just did, because it was so hot, beer was the better option. A cold beer seemed like it called out to me rather than hard liquor. Having Jagermeister might not have been good on a hot summer stage. But yeah, drinking some alcohol before screaming works for me. I'm not recommending it to young kids - I'm just saying that's what does the trick for me."

How was Colin Richardson like to work with as a producer? He's mixed you guys in the past.

"Yes, he's mixed the last two records, and he made them sound amazing. When we listened to the records, there were a few aspects that we felt could be better - no fault to Colin, because he was just taking what somebody else had recorded - so we decided that we needed one cohesive vision going into this album, and Colin was the guy for it.

Let's talk about your guitars and gear. What did you use in the studio?

"Not much. My main guitar was a Jackson USA King V that I've had for a while. It has all the magic that I need. I didn't have to worry about a million guitars. It's a standard six-string model, but it's amazing.

"Gear-wise, I put it through a Peavey 6534 Plus, along with a Maxon overdrive pedal. That was pretty much it. Everything else effects-wise was done on Pro Tools, and I used an Eventide Harmonizer here and there.

"Live, I'm using the Fractal Axe-FX, which is really cool. It's great not to have to bring a million stompboxes out on tour. The Axe-FX has it all right there. It's very precise and reliable, which is good, because I don't have to worry about changing settings night after night. Plus, I can go direct into the PA without any cabinets, so it makes everything very portable. I can literally bring my live sound on a plane with me. It's pretty awesome."

As a guitarist, are you looking forward to hanging out with John Petrucci when you tour with Dream Theater next month?

"Absolutely. We've all been big Dream Theater fans for years, so the thought of opening for those guys is really exciting. They have a bit of a different audience than we do, so we're hoping to win some new fans over.

"Hanging out with John Petrucci should be a lot of fun. He's such a master guitarist. I hope I can learn a few new things from him. He sent us all e-mails about having some backstage shred sessions, so I'm going to take him up on that. It was great to get that e-mail, by the way. Nobody's ever done that before. It just shows what an awesome guy he is."

Lastly, we have a few reader questions for you. Jakub Folcik asks, At what age did you pick up the guitar, and what were your learning techniques?

"I picked up the guitar at 14 and immediately started taking lessons. In between my lessons, though, I learned songs from my favorite bands. Metallica, Megadeth, Slayer, Iron Maiden, Iced Earth - I learned as much as I could. Chord shapes, lead licks…anything I could pick up, I did it all. That was really it. I just played as much as possible."

Kiaran Jay wants to know if you have any unusual musical projects that you'd like to do away from Trivium.

"Mmmm, not really. Trivium's pretty much full-on. If we're not touring, we're writing a record. We don't really have time off to do anything else. If I were to do something different, it would be for fun. I might want to do an instrumental album, kind of like what Joe Satriani does, where it's really based in the songwriting and not so much the shred aspect of playing the guitar."

Kieran Fiferman asks, What's your favorite riff to play off of In Waves?

"Wow, that's a tough one. Hmmm...I think, if I had to pick one off the top of my head, it would be the middle fast section in Dusk Dismantled. Even though it's so brief, when it kicks in it has a lot of energy and I get to do a really fast solo over it. I love it. There's a lot of other riffs on the record that are fun to play, but if I had to pick one right now, that would be it."