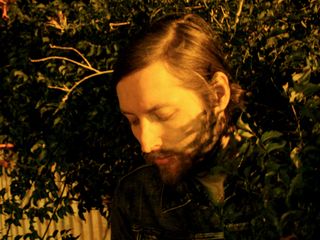 The Killers' Mark Stoermer came down from the balcony to finish his first solo album, Another Life.

"It was a crazy way to get a song," says The Killers' Mark Stoermer of The Haunts, a nightmarish, guitar-heavy track that's one of the highlights on his new solo album, Another Life. "I was staying at the Chateau Marmont in LA, having weird dreams and watching Kurosawa films. One night I had a ghost encounter and wound up trapped on the balcony, locked out of my room."

The bassist managed to call the front desk, and when a porter arrived he told Stoermer that the hotel was indeed haunted. "The place has always had a bit of a reputation, but I didn't expect that," says Stoermer. "Fantasy and reality came together for me. It was pretty freaky."

Equally vivid experiences, many of them involving matters of the heart, are recounted on Another Life's nine other cuts, which sees Stoermer, working on his own and with friends, exploring rock, alt-country and grungy pop. Recorded over the past year during a cool-down for The Killers, the album is, in Stoermer's view, "pretty much an experiment. I wanted to test my limits as a songwriter and see what I could do. Before you knew it, I had 15 or 20 songs, 10 of which I didn't mind people hearing."

For a limited time, fans can download the album for free on Stoermer's website (it will be issued on vinyl soon, and possibly on iTunes). MusicRadar sat down with Mark Stoermer the other day to talk about Another Life. In addition, we discussed the status of another record...the next one from The Killers.

Your album isn't a bass extravaganza in any way.

"No, it's not. My bass playing on my album is very much what it is in The Killers - it's there to support the song. Some things might be based around a bass riff, but more often than not, if there's a chord structure and a melody, I try to bolster those elements."

A few of the tracks - Weary Soul and Everybody Loves The Girl - bear a strong Bob Dylan influence, particularly his Nashville Skyline period.

"Yeah, that's definitely there on those songs. I was pretty late coming to Dylan. Until about four years or so ago, all I knew were his hits; I didn't know the body of work. Then I started really listening to him, and I couldn't stop. For a long time, I listened to Bob Dylan probably every day.

"Every album, every period - I absorbed it all. Without a doubt, Bob Dylan is one of my biggest influences. Dylan and The Beatles are huge for me. I do listen to other types of music - I love jazz and classical and…even Black Sabbath. [laughs] But Dylan, yeah, I'm not surprised that you can hear that."

Stoermer on stage with singer Brandon Flowers (left) during a Killers performance at the Brit Awards in 2007. © Kieran Doherty/Reuters/Corbis

Do you have any favorite Dylan records?

"It's funny that you mentioned Nashville Skyline, because that's one of the two records that really opened the door for me getting into him - that one and Desire. See, I'm more of a music-and-melody guy - I only get into the lyrics once I like everything else. Desire and Nashville Skyline have wonderful songs. They're very melodic - they're pop songs, really.

"Once that door was open, that's when I went out and got everything and really dug into what Bob Dylan is all about. I wasn't trying to 'do Dylan' on my record. If it comes through, that's fine, but that wasn't the idea. Lots of people imitate Bob Dylan, but nobody can do what he does."

What about The Beatles? Is there any one album that stands out?

"I love it all, but if I had to pick one Beatles album that I would listen to right now, it would be The White Album. That's my top desert island disc, too. There's other Beatles records that might be better - Revolver, Sgt. Pepper and Abbey Road are probably better in many people's eyes - but to me, The White Album is a richer experience.

"It's such a diverse album; there's so many songs and moods to go through. There's a little bit of everything on it. You've got everything from Julia to Helter Skelter. On The While Album, The Beatles may have been splintering as a band, but individually they were hitting new peaks."

Your vocal on the song Amber Bough has a very captivating, dream quality to it.

"Thanks. I'll be honest: The vocals were very difficult for me. I've never been a lead singer before. I don't sing covers, I don't get up and do karaoke - I don't really know where my voice is at. When making these songs, I'd hear a melody and I would try to adapt to that range.

"My voice is kind of low, so I have to stay within certain parameters. I had to adapt a certain style to put the melody across. To me, a song works if a singer delivers it, and that doesn't always have to involve highly technical vocal skills. It's all about sincerity and connecting with the lyric. But I can still appreciate a singer like Freddie Mercury. [laughs] That's just not me, though.

"Here's where we get back to somebody like Bob Dylan. He might not be what people consider a great singer, but he's great at singing his songs."

"Yeah. I believe so, too. Nobody can do what he does."

There's a bit of a world music feel to The Way We Were Before.

"Yeah, there is. That one is interesting. I was working on the music on my laptop - I was in this hotel in Miami, which might explain the world music vibe - and a melody came to me, and I just had to complete it right there. It was just an instrumental piece that I applied lyrics to later. It uses drum machines and real drums, whereas the other ones have just real drums."

What's the status of the next Killers record?

"We've got a lot of songs and ideas. We recorded some things already, and I think some of what we've done could make the new record. I'd say we're still in the middle of the planning process. Optimistically, The Killers should have something by next summer, but on the other hand, it'll be done when it's done.

"We are working, however, and the band is more or less back together in Vegas. We were spread out for a little while on our hiatus. We did some shows this past year, probably 10 or so festival dates. It'd be good to get something out next year...if all goes right."

The songs you've recorded already, did you do them on your own, or did you work with an outside producer?

"A little bit of both. We're kind of in this phase where we're trying to decide what to do with producers. There's scheduling and things to think about. There's a couple of producers we have in mind. It's up in the air right now who will produce the album.

"I can't be too specific simply because we're in the middle of everything. We have worked with some people, but we'll figure out in the next couple of weeks what we're really going to do. Multiple producers may be involved. We might use some of the tracks that we did with other producers, but we might scrap everything and start all over with somebody new."

Is there any kind of general direction for the record? Anything you do or don't want to do?

"It's hard to tell right now. We're still writing. But the idea - at least in theory, because it doesn't always work that way - is to try to do the best of what we've done before. It'll be a little bit of everything, with the band playing to its strengths."