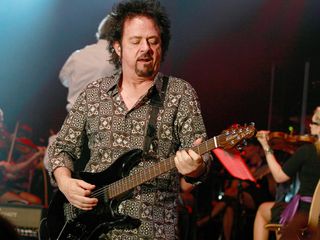 Steve Lukather works it out on stage in Berlin last January. © Lutz Müller-Bohlen/dpa/Corbis

"I'm busier than a three-legged cat trying to bury a turd on an ice rink," says Steve Lukather, colorfully describing his current state of affairs. The venerable guitarist and founding member of the Grammy-winning band Toto, whose work adorns a veritable encyclopedia of rock, pop and jazz, is taking a rare breather. Only not for long.

In two weeks, Lukather will join fellow guitar gods Joe Satriani and Steve Vai on the first G3 run in five years. The axe excursion will touch down in Australia and New Zealand, and fan expectation is high. "There's a lot of awareness," Lukather says. "Truthfully, though, I'm still trying to figure out my role. You've got Joe, you've got Steve Vai... I must be the crazy cartoon before the double feature."

Comedic candor comes naturally to Luke. Problem is, it used to take on other forms - self-loathing and doubt - which triggered what the guitarist calls "a 35-year-cycle of Saturday nights. At least I'm lucky enough to see another day. Some of my friends weren't so fortunate."

MusicRadar sat down with Steve Lukather recently to discuss G3, along with his next high-profile tour: Ringo Starr And His All-Starr Band. But it was sobriety and the guitarist's new lease on lease on life that dominated our remarkably frank conversation.

What made you decide to sign on for G3?

"I was asked! [laughs] It's always nice to be wanted. But really, I'm a big, big fan of their work - Joe and Steve's. Joe had once hit on me before the idea of a G3 tour, but I was like, 'God, I don't know. You guys are really good…' I just didn't know if I could hold my own in that kind of arena. These guys are genius-level players.

"But last year, Joe and I were on the same bill at this festival, and he came to be backstage and presented the idea again. I was honored, but I told him, 'Man, are you sure I'm sure the right guy? Do you think people will dig what I'm doing?'"

Did the idea of playing in Australia and New Zealand appeal to you?

"Sure. I don't have the chance to go to those places that often, so I thought, Hey, these could be the right places to play. It might be fun to perform in front of totally new crowds, the whole G3 audience. This came along at a great time 'cause I'm pretty much a new person. I've gone through a lot of changes."

"The bottom line is, I was boozing too much - way too much. I got caught up in 35 years of Saturday nights. Every night was like party night to me. As a young man, you can do that; it's OK to be an idiot. But I woke up one day, and I realized that 35 years had gone by. I had a real awakening.

"It took me a long time to get totally fed up with myself, but when I did, that was it. I quit booze and cigarettes. There's only so long you can keep doing that to yourself."

How long did you know you a problem?

"Hard to say. The thing is, we live in this YouTube world now where people can really hurt you. Shit I did 20 years ago, some drunken jam, suddenly it's everywhere, and everybody's going, 'Wow, look at that loser. He's supposed to be a great guitar player?' I was eviscerated by all the haters. It almost made me quit playing.

"But it caused me to take a good hard look at myself. I said, 'Hey, I've had a great career. I'm a good person, and I've got a lot to offer - what am I fucked up all the time?' I've had a lot of self-esteem issues."

But your reputation in the industry and amongst other players is stellar.

"It… well, thanks, that's nice. But you know, there's a lot of pressure in doing this. And I get these things thrown at me: 'He's just a studio guy. He's some slick LA player. He's this, he's that…' It goes on and on. I get slammed. After a while, it messes with your head. You start to believe the crap. It took me a long time see it for what it is."

Can you describe your 'awakening'?

"It was just that moment when you know you can't lie to yourself anymore. I went to the mirror, and I was like, 'Holy shit, I'm that guy! I'm the bloated motherfucker with the puffy face.' It was horrible. It doesn't take much more than that.

"So I said, 'Enough of this. I'm done!' It's been three years now. I stopped drinking, smoking, I hike three miles a day… It's something else. My health is so much better. Plus, what happens is, you realize that the problems you think you had weren't problems at all. You start to go, 'It's not me, it's them!'

"Or something like that. Anyway, like I said, the G3 tour is happening at a nice time. I've got a lot of confidence now. Hopefully, I won't have a big bullseye on my back, what with all the shredders in the audience."

It's hard to believe you'll have a bullseye on your back. Joe only invites the finest players around…

[laughs] "Thanks. Steve Vai told me the same thing: 'Joe asked you, man. He wouldn't ask you if he didn't want you to be there.' But see, I'm not like those guys. Joe and Steve, they're killers. I sing and I play, I do whatever, but I don't do that level of guitar thing that they do. Thank goodness G3 isn't a competition. I would surely lose that fight if that were the case."

Have you put together a setlist?

"I have. It reflects my solo work, and the things we're going to jam on will be a lot of fun. See, I don't mind being honest about this. On G3 in the past, they've had John Petrucci, Yngwie Malmsteen, Eric Johnson - unbelievable guitarists. People might go, 'Steve Lukather? How does he fit in?'

"So I'm just going to go out and be me. I'll have my band, we'll play, and it'll be me adding my thing to this incredible musical gumbo of Joe and Steve. I mean, the third guy is usually the wild card anyway, so if you look at it that way, I can't lose. That's what I need to remember when I'm in front of all of these shred fans. As you can tell, I can be pretty hard on myself."

Yes, you can. But not everybody gets a call to come and play with Ringo Starr.

"No, they don't. That's not bad. I'm so honored to have gotten the call. They've asked me before, but this time everything worked out. He's my third Beatle, too - I've played with both Paul and George. The Beatles were my arm-twist to life, so to come full circle like this is surreal.

"I saw this thing where Ringo mentioned my name, and just to have a Beatle acknowledge me, come on, it's incredible. When I was a kid, thinking of just being near a Beatle was an unattainable dream."

Do you know what songs you're going to play with Ringo?

"It's all about what he wants to play. Of my stuff, we'll do the Toto big ones - Hold The Line, Rosanna, stuff like that. But I'm more interested in what Ringo wants to play of the stuff that isn't mine. It's going to be fun. I mean, to turn around and see that your drummer is Ringo Starr - that's mind-blowing! I don't care who you are.

"I know I've said a lot, but I'm pretty psyched about everything I've got lined up. I'm booked solid this whole year and into next year, and I'm playing with legends. At the end of the day, it's not bad; in fact, it's pretty great."