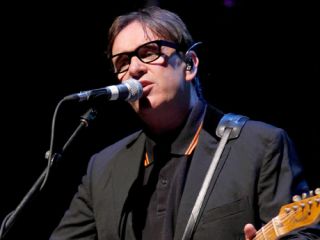 Chris Difford and Squeeze will be playing a bevy of hits at Coachella and on a US tour. © Scott D. Smith/Retna ./Retna Ltd./Corbis

Chris Difford just might buy an iPad. The Squeeze co-founder, who claims to have "no idea" when it comes to modern technology ("I try to avoid going into recording studios"), recently heard an album that the band's drummer, Simon Hanson, make on his iPad - and was knocked out.

"It sounded extraordinary," says Difford. "I was really impressed. I suppose if Simon can do it, we all could do it."

He may have to pick up that tablet on the road: On 10 April, the reconstituted Squeeze (which also includes Difford's musical partner, Glenn Tilbrook, along with longtime member John Bentley on bass, and keyboardist Stephen Large) will embark on a US tour, with not one but two performances at the Coachella Music & Arts Festival in Indio, California.

In addition, the band that racked up a stunning array of cleverly crafted pop-rock gems during the late '70s and early '80s, songs like Pulling Muscles (From The Shell), Another Nail In My Heart, Tempted, Black Coffee In Bed, among others (compositions which resulted in Difford and Tilbrook being compared to Lennon and McCartney), are releasing a limited-edition white vinyl package, Live At The Fillmore, on 14 April. The set will be available only at the band's US tour dates and through their website.

We sat down with Difford recently to discuss his ongoing songwriting collaboration with Glenn Tilbrook and to talk about ex-Squeeze member Jools Holland, onetime band producer Elvis Costello and some fave guitars.

When you and Glenn met, what was it that made you two recognize each other's strengths?

"That's an interesting question. I'd say it's knowing each other's strengths and weaknesses that allows us to keep going. It takes a lot of time in relationships to understand that kind of thing and how it all works. We've been together four decades now, and we're still trying to figure out strengths and weaknesses. It's an ongoing thing. I don't think it will ever come to an end."

In a way that mirrors the way Elton John and Bernie Taupin function, you write words for Glenn to put music to. How did you two establish that pattern?

"In the very beginning, before we met, I had written my own songs and Glenn had written his. We got together and were sitting around one day, and Glenn just said, 'Why don't I write the music and you write the words?' I gave him some words, and before I knew it, he wrote out the music. That became part of our life, how we did things, in probably much the same way that it did for Elton John and Bernie Taupin."

However, unlike Bernie Taupin, you're a musician - and part of the band. Have you ever given Glenn melody ideas?

"Yeah, it's not exactly the same kind of setup. But no, I've always just given Glenn the advantage of doing whatever it was that he wanted to do, because he's so brilliant at it. It just always seemed as though that was the right thing.

"He's writing right now, in fact, and I haven't got a clue what's going on musically. But that's OK - it's good to be surprised. I always look forward to what Glenn serves up. I suppose it's like being in a restaurant: You know what you've ordered, but you don't know what it's going to taste like. But normally, when it comes to what Glenn does, it tastes pretty good."

Being that you're a musician, when you write, there's probably a certain cadence to the words. Your lyrics aren't stream-of-consciousness prose…

"Yeah, from that point of view, I do have certain rhythms in my head; there's a musical element to the lines. But I never submit those ideas to Glenn. He writes the music he wants to write, and I'm more than happy to hear it when he's done."

When Squeeze came on the scene, the band was tagged as 'New Wave.' Did that bother you, or did you not care?

[laughs] "No, I didn't care, really, because I knew that we weren't a passing fancy or part of a trend that was going through. You know, what can you do? Radio stations and magazines have to figure out how to promote you, so they give you these flags, particularly in America - in the States, we were lumped in with these other bands that were supposedly New Wave. Obviously, our audiences weren't."

When you wrote some of your bigger hits - Pulling Mussels, Another Nail In My Heart, Tempted - did you know there was something special about them?

"I think when we were recording the album East Side Story, Tempted stuck out like a sore thumb as being a fantastic song. And when Paul Carrack sang it, that really turned it into something brilliant. There are obvious songs like that one; when you hear them, you go, 'OK, that's going to work, that's going to be really great.'

"There are other songs that, when you record them, you listen back and you say, 'Hmm, I'm not sure where that fits in.' But what can happen is, you go on tour and you might play that same song, and suddenly you're thinking, 'Wow, actually, that's pretty good.' I do like when that happens.

"What's been happening over the last five years is, Glenn and I are re-investigating our history, and we're putting songs in the set that I never, ever thought we'd be playing at this stage in our lives - songs like Revue and The Knack and Bang Bang. We felt that we had to move on, and to move on we sort of moved back."

When you and Glenn got back together to write a few years ago, did everything fall back into place, or was there a getting-to-know-you-again period?

"From a live point of view, we just got right back on stage and started playing. We don't sit in a room with acoustic guitars and spar in a West Coast kind of way - we're not those sorts of characters. We're very British, very proud; we stand our ground and we have our own space. There's always lots of mind games going on. [laughs]

"That's just the way it's always been, and I don't think it's ever going to change. When you know how the other person is going to react, it's kind of comforting in a way."

When Squeeze formed in the '70s, how did you go about recruiting members?

"Originally, Jools was at school with Glenn, and Gilson, our drummer, he answered an ad. The band just came together, really."

When Jools left in 1980, was it a big blow to you? Even then, he was quite popular with fans.

"It was a blow, yes - a huge blow. I remember going to a café one morning and crying my eyes out. There I was, one of my closest mates in the band was going off to do something else - what am I going to do? But he was absolutely right to do so; he had his own career to forge.

"He did come back into the band when things were very different for us. He rejoined for a year, and that worked well. I do a lot of solo work with Jools, and when I'm on stage with him and Gilson, I hear a part of Squeeze that I don't hear when I'm on stage with Glenn. It's very interesting. So I get to straddle both sides of Squeeze, which is a great place to be."

What was it like working with Elvis Costello on East Side Story?

"His discipline was extraordinary. He taught me an awful lot about myself, so it was wonderful working with him. He's a gentleman, he's extremely intelligent musically… I don't know if he changed the songs in any one way, but he certainly threw a few curves at us and made things different from what we would normally do, which is what a good producer does. I really enjoyed working with him. He's a good friend, as well. We don't see each other that much because he's always so busy."

As a guitarist, you're not one to showboat - you don't go in for mad solos or anything. How do you view your guitar playing?

"Glenn taught me a lot of guitar over the years. Because he's written the music, he's always showed me various chords that I've had to learn. But he's also taught me tempos and how to be correct, 'cause he's such a correct guitar player. I always say, 'If you're going to be wrong, be wrong and be proud of it.' [laughs] So when I'm wrong, I just make more of it and I don't try to hide.

"I love playing acoustic guitar, much more than I ever did - I absolutely adore it. Playing the acoustic has become part of my life, which I never thought it would. I play electric guitar when I'm in Squeeze, and I adore that, as well. It's like I can be 18 again - it's quite good fun."

Are there any guitars you own that you feel are special in some way?

"My favorite acoustic is a Jim Olson model. He lives in Minneapolis, and he builds guitars by hand. They're very special instruments. Of the electrics, there's a paisley Fender Telecaster that I like a lot - it's from 1966, I believe. I don't have it anymore, actually; a friend of mine has it, and he's trying to sell it back to me. The only problem is, I don't have the money to buy it."

Oh, my… He should just give it back!

With Glenn writing music to a new set of your lyrics, does that mean a new Squeeze album could happen soon?

"I don't know whether an album is fact or fiction. We're just writing songs. If they take shape as an album, then there will be an album. Glenn doesn't respond well to pressure, so we'll just have to wait and see. We might just do a few songs, I don't know. In any case, I'm really looking forward to seeing what he comes up with. He's such a genius."