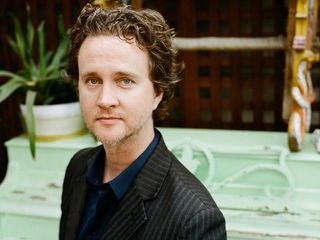 One would have to be living under the proverbial rock to be unaware of the imminent opening (and no doubt global domination) of The Hunger Games, the cinematic treatment of Suzanne Collins' insanely popular novel. (And OK, if for whatever reason you haven't bookmarked the date, it's this Friday, 23 March.)

A big-time movie event comes with a big-time soundtrack, of course, and The Hunger Games is no exception, although it's a curious and fascinating one, with Arcade Fire, The Decemberists and Birdy resting alongside Taylor Swift, Maroon 5 and Kid Cudi.

While Wells may not yet be a household name, chances are you've got his work on your playlist. Whether as a producer, writer, mixer, musician or all four, he's had a hand in crafting hits for everyone from Adele Katy to Katy Perry to Mika and OneRepublic.

We caught up with Greg Wells to talk about working with T Bone Burnett and Kid Cudi, writing with Adele, and to find out how a one-time unknown got to sit in a castle and pen a hit with Carole King.

How did you come to work on the Hunger Games soundtrack with T Bone?

"He produced the version of Safe & Sound that went out to iTunes and is being used in the movie proper, but he had the idea to bring in another producer to reinvent the song for Top 40 radio - while still staying true to what he and Taylor and Civil Wars had done.

"Somehow, I made it through the door. [laughs] I met with T Bone, and we got along really well, and then I did my own track around the vocals and the guitar part. There was no reason to recut those things, because they were really great.

"What I did still sounds like the same song, but with new drums, bass and guitars, a reverse E-Bow that's pitched two octaves up - it's a re-interpretation of what T Bone did. In his version, there's a rolling, marching snare drum at the end that I really liked, so I started with that."

Sounds like you ran pretty far with it. T Bone and Taylor Swift were cool with you just going for it?

"Yeah, they were. Those are some pretty high-octane cooks in the kitchen, sure. And there's other people to please, too - there's the movie studio. But I just followed my nose, which is what T Bone instructed me to do. 'I'm not going to come and watch you work,' he told me. 'Just do your thing. When you're ready for me to hear it, I'll come to your studio.'

"And that's exactly what happened. I did it at my studio in Los Angeles and played it for him when I was done. I was so nervous!" [laughs]

Well, he must've liked it, because the two of you worked with Kid Cudi on The Ruler & The Killer.

"Yeah, and that was a completely different exercise. T Bone really liked what I did, and he told me that Kid Cudi wanted to be involved with the soundtrack - he was going to write with him, but he wanted to invite me, as well. So we all convened at my studio to produce it.

"There couldn't be three more different people in a room. We were all kind of laughing about it, but we got along great. Cudi's very cool, and very into being creative. He's not chasing being a hipster or anything like that. T Bone and I, in our own ways, are quite similar."

How did the track take shape? Who started things off?

"I think it's fair to say that I did. I showed up about an hour early with this drumbeat in my head. So I put it down, then I and put some guitars on top of it and some bass. There were sort of two sections to this thing, and I played it for them when they got there. I was kind of cringing, like, 'Oh, God, you're going to hate this…'

"But they liked it. Cudi, in particular, really liked one of the two sections and the drumbeat. So we just followed the drums. We went in the drum room and worked on what is a reinterpretation of a Bo Diddley beat - and the origin of that beat is Sing, Sing, Sing, the old Benny Goodman hit from the 1940s, with Gene Krupa playing that drum solo. That's one of my favorites - I love that beat! [laughs] It's one of those 'if-it-ain't-broke-don't-change-it' beats.

"What we did is a rockier version of that thing. Cudi plugged a guitar in - he's been playing guitar for about a year and a half - and he came up with this riff. T Bone and I were right beside him, watching him, and we would comment when we liked something he played. We just let him go for 20 minutes or so, and we picked our favorite bits and built it like that.

"Cudi's great. The one thing I love about writing a song with a rapper is that the lyrics come so fast. If the artist is really talented, that ability is right there - it's like a well-oiled pitching arm. Lyrics don't usually come fast in a songwriting situation, but with rappers, it's totally different. It's like boom - it just explodes!"

When working on these songs, had you seen the film already - or even scenes, just to get the vibe?

"I saw an extended trailer for the film before I even met T Bone. I have to admit, I was totally unaware of the Hunger Games phenomenon. My kids, on the other hand, were very aware of it. But the five-minute trailer I saw was very moving. Then I heard some of the stuff that T Bone was working on, and it was great. He brought me to his studio - this was after he realized I wasn't nuts [laughs] - and he played me the entire soundtrack.

"He did an amazing job on it. It's a phenomenal soundtrack, and not what you would immediately think of for a movie like this - you know, teenaged kids being forced to kill each other… I'm pretty excited to see the whole movie. And, of course, I've been a fan of T Bone's forever. When I was told about this, I was like, 'Yes, yes, yes!' Everything about it I was into."

Let's jump back to early in your career. You co-wrote your first hit, The Reason, with Carole King - and then George Martin produced it for Celine Dion. How on earth did that come about?

[laughs] "It was pretty crazy! Sure, you look back and go, 'How did that happen?' but it's clear with hindsight that you have to be crazy enough not to quit. This is true for anything, whether you're making ball bearings for airplanes or you do what I do, or if you want to be the best schoolteacher out there - whatever it is, just don't let rejection stop you."

"In my case, I kept going and going. I was signed as an artist to IRS Records, but this was when the label was in its last days. I made a record that never came out, which turned out to be a blessing, really, because it led to Miles inviting me to these songwriting events at this castle in the south of France. For real!

"I didn't have a very good time at the first one, but at the second event, on my first day of writing, it was with Carole King and Mark Hudson. Honestly, I have a third of that song, and George Martin called me when it was recorded and thanked me for writing it, but really, I watched them write it. I mean, you've got Carole King, this veteran, a five-star general of songwriting - and Mark Hudson isn't too far behind. Pretty amazing."

Moving to more recent accomplishments, you co-wrote One And Only with Adele. What's working with her like?

"Writing with Adele - and I'd say this even if her record came out and completely flopped - is as good as it gets. Once she susses you out and decides if you're cool or not cool and if she can relax around you, she's really good humored and self-effacing. When she comes up with an idea, that's what she sounds like - she sings her face off. She has this massive, God-given voice.

"Here's how the song came to be: I heard two ideas in my head - one was a faster voodoo-y kind of thing; the other was a slow, 6/8 piano thing. She liked them both, but she said she wanted to start out with the piano thing, so that's what we did.

"I sat at the piano and played through this cycle of chords I heard in my head. I heard a few melodic things, but I didn't want to suggest anything - she was kind of pacing the room, and she had her notebook.

"After about 10 minutes, she said, 'Look, this might be complete shit, tell me if you think it is…' and right there, in full voice, she broke into the fully written chorus of One And Only over my chords. I nearly fell off the piano bench! [laughs] When she was done, she was like [in a small voice], 'Do you like that?' 'Yes, I like that. I like it a lot.'

"I've heard [writer/producer]Dan Wilson say this about writing with Adele, and it's really true - it kind of spoils you working with any other artist. She's just so out of control, and she really only was 21 years old when we were writing that song. She's like a baby!"

What did you think of Rick Rubin's production of the song? Had you recorded a full demo?

"Oh, very much so. I mean, I knew from the get-go that Rick would be producing the song. Rick and Columbia Records were very involved with getting me in the room with Adele, and I was told, 'Don't even do a big demo, because Rick doesn't like over-produced demos.'

"I love what he did with the song. I marvel at the vocal sound, and I can't quite figure what's going on. It's probably very simple, it's probably like: her voice, a great mic and a great compressor. The drumbeat is a little busier than what I would have done - it's a little more Jeff Porcaro-shuffle-y than I would have it - but that's my only tiny little nitpicky hole I can poke in it. I'm a real fan of Rick's work."