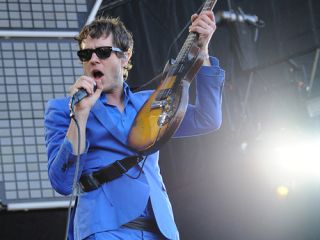 The idea of four guys driving through the desert in a car outfitted with arms and fins designed to play, strike, pound and beat musical instruments of every possible stripe might sound like some sort of juvenile frat stunt.

That is, until you realize it's the latest high-falutin' video from OK GO, one for their song Needing/Getting, and it's been bankrolled by Chevrolet, in fact, to promote the company's new Sonic sub-compact vehicle - in which case it all makes perfect sense.

According to OK Go singer and guitarist Damian Kulash, context is everything, and when it comes to the elaborate clips the band has become famous for since 2006's award-winning, viral-tastic Here It Goes Again (otherwise known as 'the treadmill video'), "The crazier the idea the better," he says, "We're pretty much alone in this arena of videos, so we might as well see what our imaginations can really do."

Over the years, OK Go (which also includes bassist Tim Norwind, drummer Dan Konopka and guitarist Andy Ross) have cornered the market on video genius with clips that feature both stunning dance choreography (A Million Ways, All Is Not Lost) and how-did-they-do-that? mechanical wizardry (This Too Shall Pass). Needing/Getting, co-directed by Kulash and Brian L. Perkins, sets a new creative highwater mark for the band, and with 15 million YouTube views in the two weeks since it premiered during the Super Bowl, it might hit the top audience-wise, as well.

In an interview with MusicRadar, Damian Kulash talks about the making of the Needing/Getting clip, OK Go's unique place in the music-video world of 2012 and where the band might head musically on their next album.

How did the concept for Needing/Getting come about?

"We were just trying to figure out what we could do with a car, actually. Far in advance, we were talking to Chevy. We were inspired by old Italian motorcycle choreography, which led to me thinking, What could we do with cars? That was it.

"In truth, having the idea is always the easy part; turning the idea into reality is what's tough. I think lots of people have insane ideas, but how many of them are naïve enough to think they can actually work?"

Who in the band is mostly in charge of 'insane ideas,' or is it a free-for-all?

"I'm kind of the captain of the video ship. In the case of this video, Brian L. Perkins, the director and I worked together on it for a pretty long time. Some of the videos, the band has been pretty involved in; others are more me and a collaborator. With projects of this scale, of course, you have to draw on everybody's skills."

You had to complete something like two months of stunt driving skill for the video?

"It was spread out over a few weeks, but there were only three days of training, with a lot of practice. It was fun, though. Even if the idea hadn't been pretty good, I probably could have been sold on it because I got to take stunt driving lessons."

Do you know how many instruments were used in the clip?

"Somewhere between 1,200 and 1,500 - I'm not sure, exactly. And it depends on what you call an instrument. For example, the set of ceramic tiles hanging off the front of the car, is that one instrument, or is each separate tile an instrument?

How many takes were necessary to get everything you needed?

"Well, we shot it over four days. Each section of the chorus we ran between five and 20 times, I'd say - with some test runs, as well. We never got the arms that were attached to the car to be robust enough to run the entire length of the course at once. Every third or fourth time of driving, I'd snap a panel of one of the hitting arms off."

Speaking of takes, Here It Goes Again required quite a few. An out-of-shape band couldn't do such a thing.

[laughs] "I guess we got a pretty good workout, but I don't remember being so much physically tired as I was mentally exhausted. The way we make our videos is, we plan for a lot of playtime. We think of scenarios that we think will work - like, we should make a dance video with treadmills, or we should play a song using a car - but the specifics require a lot of planning and trial and error. You can spend all of your day trying to solve problems."

Do video ideas ever come to you when you're writing songs?

"No. Although I love the idea of the art forms overlapping to the point of indistinguishability, so far it hasn't happened in that way for us. It has in how we structure our time. We wake up and try to chase the most creative idea - sometimes it's a record, sometimes it's a video."

Do you feel that making high-concept videos puts the band in a rarefied position these days? You and the Foo Fighters are pretty the only ones doing them anymore.

"We're in a rare and lucky position for a lot of reasons. We've had a ton of success doing what people didn't expect of us, which has made a great career model for us in general. But because we're known for doing these things, it's made it a lot easier for us to find the funding to make these videos.

"Let's face it, no matter how exciting the idea of us driving around a test track and playing over 1,500 instruments might be to a car company, it's not a very wise investment - that is, until you consider that we've done 800 crazy things like that and they've all been pretty successful.

"We like doing these things. Most bands dread doing videos because they feel like they're advertisements - which they are. Essentially, a record label hires a director to make a commercial for the CD they're trying to sell. While the band might be in that commercial, it's not generally the creative output of the band that's in that commercial. So for us to discover this creative outlet lets us kill two birds with one stone. It gave us a way to connect with our fans directly and not have to deal with all of the politics and control structures of major labels. It also allows us to chase ideas that don't fit particularly well into the old categories.

Andy Ross, Dan Konopka, Tim Norwind and Kulash at the premiere of The Muppets, 2011. © Frank Trapper/Corbis

"It used to be that all of the different art forms were distinguished and defined by the difference in their medium, but now it's all the same medium; the only difference is whether you're going to read those ones and zeros as sound or video.

"Most creative people I know get excited by an idea more than a singular piece of technology. I mean, I love playing the guitar, but mostly I love the idea of a song scratching that itch deep inside my head. If it takes a guitar to do that, fine; if it takes a synthesizer to do that, fine. If it takes a video or a performance art stunt or, fuck, a smell [laughs] - the fun part is making something. The distinction as to which part of it is art and which part is promotion, that comes down to semantics."

Do you ever worry that people are paying more attention to the band's videos than the music?

"That clearly is the case, and whether or not I should find it worrisome is the real question. We love our songs, and I'm super-proud of our last album - obviously, we'd love for people to love it all as much as we do. By and large, I think they do. We've got tons of fans who come to our shows.

"Because we're pretty much the only people working in this video space, it's no surprise that that's what gets the most attention. We're completely alone here. In general, though, I don't like thinking of it that way.

"If we get to keep chasing our tails creatively and nobody can tell us that we can't do it or it can't be paid for, that's pretty much Valhalla right there. I don't want to keep my head in the 20th Century logic that songwriting should be walled off creatively from everything else."

Any plans for the next album? Have you started writing and demoing?

"We're writing right now. Our first sort of proper session is at the end of March. We're writing our little hearts out. I can talk about what I think the album might be, but I'd be wrong. The best stuff is always in the surprises.

"One thing I can say, though, is that things are so very… soulful. For the last couple of years, I've been in a big 1960's soul phase. While you certainly won't mistake any of our songs for Solomon Burke or Al Green, the fact is that's all I've been listening to, and it will be in there somehow."