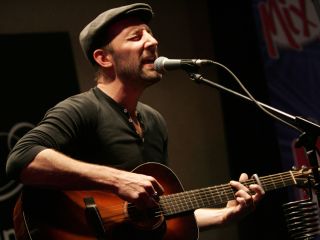 It's four o'clock on a fall afternoon, and Mat Kearney calls from a cell phone while aboard a train en route from New York City to Boston. "I'm looking at a bunch of sailboats outside," he marvels. "You get to see so much more of the country when you travel by train instead of a bus."

Kearney admits that the logistics of touring don't always allow him the luxury of riding the rails, but when the routing permits such a mode of transportation, he jumps at it. "It's old-school, which is cool," he says. "But I really do find trains to be relaxing and peaceful. They're soothing."

"Soothing" would be a good way of describing Kearney's expressive, raspy tenor, which he uses in a variety of interesting ways - playful and woeful, brooding and carefree, vulnerable and brash - on his fourth and latest album, Young Love. He mixes up genres, too, underpinning breezy acoustic pop with infectious hip-hop rhythms that add rich colors to his vivid, anecdotal lyrics and stirring melodies.

The Nashville-based singer-songwriter and guitarist scored a king-sized hit with this approach on his 2006 release, Nothing Left To Lose. He veered into a more straight-ahead adult contemporary setting on his next album, 2009's City Of Black & White. "I wrote the songs I wrote and chose the kind of production that worked," Kearney says. "I'm still glad I made that record and wouldn't change a thing."

Young Love, with its beats-a-plenty, hook-o-rama lead-off single, Hey Mama, finds Kearney revisiting and perfecting his format-smashing formula. It's the sound of an artist in full flight, and the album is a shape-shifter, playing itself out in your head after repeated listens.

MusicRadar spoke to Mat Kearney about the beauty of blending musical styles. In addition, we talked about his influences and what guitars he holds nearest and dearest.

Was your writing or recording process different on Young Love than on previous records?

"It started with the writing, yeah. The first song I wrote for this record was Hey Mama. I didn't have a guitar with me at the time, so I made up these beats by clapping my hands and stomping my feet. Then I hooked up a mic and recorded myself dancing around the room making up this really fun, playful song. I wasn't planning on writing something, but this cool hip-hop thing just happened."

Sounds like a real street-drummer thing was going on.

"Yeah, exactly! It wasn't a traditional way to write, at least for me. It was definitely more of a high-energy, hip-hop way to go. But I had such a good time doing that. I wasn't tied to what I was playing on the guitar; it was just pure rhythm and me improvising vocals. I was able to figure out the music later - the vibe came first."

You've described Young Love as being a "return to innocence" for you. Can you expound on that?

"Yeah, sure. Well, just the title kind of sums it up, that whole falling-in-love, butterflies-in-your-stomach feeling - that's what I wanted to convey. It was happening on the record because that's what was happening in my life."

You're referring to the fact that you recently got married.

"That's right. There's that, of course. But it's also how, when you commit to someone, you're forced to dive into some areas of your past, and maybe they're times when you lost some innocence. Songs like Learn To Love Again and Rochester and some of the more gut-wrenching ones deal with the pain of the younger times of your life…trying to make sense of some the stuff we probably all went through.

"Hey Mama isn't like that at all. It's young in a carefree, casual way. That's what I really like about this record, that I was able to let myself go to both extremes. I've never had as many upbeat, fun songs as I do here. And then there's Young, Dumb And In Love and She's Got The Honey - in-your-face, visceral, guy-courting-girl songs. There's always a need for those kinds of tunes in the world. They give you hope, they make you happy."

Count On Me sure does that. You've got the handclaps and the kids' voices.

[laughs] "Yeah. It's my attempt at writing a whimsical Beatles-type song, very playful, where they take you on a story. I've never tried to do anything like that before."

On Young Love, you're returning to a cross between the acoustic folk-pop and the hip-hop textures of Nothing Left To Lose. City Of Black & White was a bit of a detour.

"I don't know, I think… See, it never fully left me. Even on tour, where I perform songs from City Of Black And White, I still do songs from Nothing Left To Lose. I never turned my back on that material. On some albums you change, that's all. The trick is to follow your heart and do what feels right.

"As an artist, you tend to gravitate to the opposite. I know when I finish a song or an album, I'm interested in doing something completely new. It doesn't always happen, but that's the idea. My poor fans - I don't know if they love that or hate that. [laughs]

"Nothing Left To Lose was more shrill; it was me using the skills that I had and really learning to write a record. City Of Black And White was me trying to do something more mature, more adult contemporary. On this album, I wanted to get back to urgency, and something about the spoken-word thing allowed me to be in the moment, to capture what was happening right now.

"Being direct is where it's at for me. I tried to keep the subject matter at arm's reach on this record. I'm writing about my life, my friends, my wife, my father - it's all stuff that is happening to me and the people I know. Doing the spoken-word thing removed any filter that might have existed between me and the message. The sonics were secondary, but still very, very important.

"It's interesting, trying to decide which direction to go in sometimes. I'm not a typical singer-songwriter; I don't have a set style. I'm not saying I can do everything, but I don't do just one thing. I've spent more than a few minutes agonizing over were to take my music, and at the end of the day, all I can really do is write what feels good and put it out there."

Is Beck a big influence? He's been able to tackle multiple genres and keep an audience.

"Totally. As far as his career trajectory, he sets an amazing standard and is a real inspiration. I can't say I know all of his music, but I completely respect the way he's been able to stretch his music any way he wants. And Paul Simon - he does traditional singer-songwriter records, but then he can do something like Graceland, which is deeply informed by South African rhythms.

"I'm into so many things and take little bits from here and there. I love De La Soul and A Tribe Called Quest. Oh, and The Roots, too, who are awesome. I can't escape the need to get in my car and hear some really in-your-face beats. That's there in what I do, and the storyteller thing is there, too."

You've won some Christian awards in the past.

"That's what they tell me."

So would you classify yourself as a "Christian artist"?

"I don't know. The Christian awards I won were a long time ago, and I didn't have any say in them. I didn't even know about them till after I won them. I think my faith is a huge part of my writing, but to call me a Christian artist wouldn't really sum me up.

"My heroes are guys like Johnny Cash. He loved talking about his faith, but he did it in a way that was real and human and honest. What he did transcended any kind of label you could attach to him.

"See, I have a bit of a knee-jerk reaction to being called a Christian artist. The industry sets certain rules and standards, but I don't want them dictating what I do. I've been playing dirty clubs and singing the kinds of songs I love for years and years. In that sense, I'm not a Christian artist. In my own spiritual sense, I hope I am. I do want to be associated with trying to find something bigger than myself."

Let's get into your guitars. What do you bring on tour with you?

"On the road I use a Martin OM Golden Era, and I also play a Gibson Hummingbird. Those are the main ones. In the studio, I play a Gibson Banner Year J-45. I've also got a '30s Martin 00-17, which is really nice. There's a '60s deadnought Martin, too. I've got a few really cool guitars.

"Oh, and I also have a little Martin from the '30s; it's all mahogany, and it's really sweet. I left it sitting around in the studio in Nashville one day and Jack White came in, picked it up and started playing it. 'Who's guitar is this?' he said. 'It's great.' That was cool getting his blessing on my guitar."

You didn't try to sell it to him? He could afford it.

[laughs] "That's true, he could. But no, I couldn't part with it, not even for Jack White."