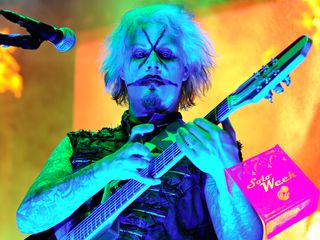 5 is a Telecaster fanatic, with several signature models and a vast collection (Image credit: Amy Harris/Corbis)

Ghostfaced shredder John 5 (born John William Lowery) has proved his soloing abilities with a series of instrumental guitar albums; sideman duties with the likes of Marilyn Manson, Rob Zombie and David Lee Roth; and session gigs with artists as diverse as Ricky Martin and Lynyrd Skynyrd.

Telecaster addict 5 is obviously a hugely adaptable player but he has two distinct personalities as a musician that mark him out from most other rock guitarists. One is his role as a blisteringly fast metal bruiser; the other, a gifted country/bluegrass picker.

MusicRadar caught up with 5 during his recent UK tour with Rob Zombie, in support of the Hellbilly Deluxe 2 record, to talk guitar solos. That is, playing solos and feeling their influence. Speaking of the latter, it turns out that John got his first taste of rock soloing courtesy of a stone cold classic...

"I was such a big Kiss and Van Halen fan, Yngwie Malmsteen, Racer X... all that stuff," says John. "I loved everybody. I just love music and great guitar players. But the first solo I can remember that I was like, 'wow, this is awesome' was Heartbreaker by Jimmy Page (Led Zeppelin II, 1969).

"I remember it was so difficult because I was so little and it was such a stretch. I probably learned it when I was 11. Well, I didn't learn the whole thing just... (sings the first few notes)."

As it happens, the pre-pubescent 5 wasn't the only shredder in the making who fell under the spell of Page's legendary improvised solo. Back in 1998, Steve Vai told Guitar World magazine that Heartbreaker had 'the biggest impact on him' when he was a kid. "It was defiant, bold, and edgier than hell. It really is the definitive rock guitar solo."

John 5 was soon to feel the impact of another brilliant soloist, Eddie Van Halen, and a recording that went off like a neutron bomb in the late '70s.

"Of course, Eruption (Van Halen, 1978)," says 5. "I think it's the tone and how it was attacked that makes it great. I'm not a big tone chaser but Eddie definitely is. Maybe I should be, but, as Eddie says, I think a lot of the tone comes from your hands. I just prefer to play guitar. That's my thing."

Speaking of the shred side of his playing, here's a turnip for the books. John was also influenced by Strat-wrangling super Swede Yngwie Malmsteen. "I think Far Beyond The Sun (Rising Force, 1984) is a great solo," says John before acknowledging another brilliant '80s shred master.

"Then there's The Attitude Song by Steve Vai. In fact, the Eat 'Em And Smile album (David Lee Roth featuring Steve Vai, 1986) has some of the greatest guitar solos ever. That whole album is very live."

Eat 'Em And Smile does indeed feature some fantastic solos from Vai. The long-fingered genius kills on tracks like Goin' Crazy and Ladies' Nite In Buffalo, proving that serious shredding and good taste can co-exist.

John 5 would get his opportunity to follow in Vai's footsteps when he recorded and played with Roth between 1998 and 2003. Typically, he wasn't content to copy his predecessor's lead style.

"I can play Steve's solos like they are on the record, but they are already there, you know? So I tried to do something totally different. When I started playing professionally I thought to myself, 'well, there's already an Yngwie, an Eddie Van Halen and a Steve Vai. How am I going to be different from these players?' Well, people said, 'try to do your own thing.'"

It was this need to develop his own style that lead 5 to appreciate the work of old school country players and then incorporate that influence into his own lead playing.

"I love Jimmy Bryant and I love Albert Lee," says John. "Roy Clark. Chet Atkins. I love those pickers. That's a whole other world. It's shredding; it's fast; it's tough to do. I like a challenge."

Like John says, guys like fleet fingered genius Jimmy Bryant, the first guy to endorse the Telecaster, were the original shredders. His rapid soloing, in an age before distortion and light gauge strings, on tracks like 1954's Stratosphere Boogie with steel guitarist Speedy West (his was not just a clever nickname either) is still awe inspiring. It's the perfect collision between melody and speed. Which is an apt description of the solo that 5 is particularly fond of from his own back catalogue.

As its moniker suggests, the 'behind the nut technique' involves bending guitar strings in the area between the top nut and the machineheads... or the headstock if you want to get technical. The technique, which is best performed on a Telecaster, is most associated with country players like Jerry Donahue and Roy Buchanan but others like Jimmy Page have also been known to bend, as it were.

Behind the nut bending produces a pedal steel effect and can be used to simulate the role of a vibrato on a hard-tail guitar. 5's Behind The Nut Love is a prime example of just how beautiful the technique can sound in the right hands. It's not just for country music...

When asked what it was that excited him about the soloing of guys like Vai, Malmsteen, Van Halen and the original country set, John replies honestly, "I think it was the technique." So, does that mean that a solo has to be a note fest to grab his attention?

"Not at all," he states before dropping an MOR-shaped bombshell. "In fact, there's a Bryan Adams song, it's that one from the Robin Hood soundtrack [(Everything I Do) I Do It For You released in 1991, natch]. What a solo in that! It's so melodic.

"Then there's Jeff Beck's solo in People Get Ready (Flash, 1985). The solo would just kill you! Actually, most of the stuff I do outside of my instrumental records is like that although there is a song on my Art of Malice record called Can I Live Again and it's very like David Gilmour."

While he has the ability to keep his soloing simple for session dates, when he's recording his own stuff John likes to push himself as a musician. For instance, any guitarist who has ever tried to double track even a simple riff will know just how hard it is to play the same part exactly the same twice. Right? Well, John 5 took double tracking to the extreme.

"I did that for the whole The Devil Knows My Name record (2007)," says John. "I double tracked everything and it's one of the hardest things I've ever done in my life. It was crazy! I had this producer, his name is Sid Riggs. I doubled one solo and he thought it sounded so good he was like 'right, we gotta double everything.'

"It was tough because you can't be out of tune or out of time. It's got to be perfect and that's tough at that speed. It took twice as long. I would nail each solo after a while but it was a challenge. I love a challenge."