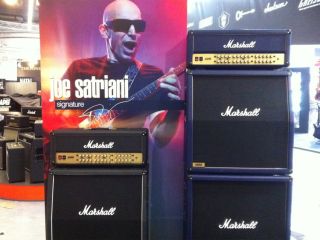 Although rumours had been flying around for some time, Frankfurt Musikmesse 2012 saw Joe Satriani's signature Marshall guitar amplifier make its official public debut.

Based closely on Marshall's flagship JVM410H head, Satriani's signature amp has inevitably been tweaked to the virtuoso guitarist's exacting specifications. The clean channel is based on Marshall's 30th Anniversary 6100, while the crunch channel incorporates elements of the Slash signature AFD circuit.

In addition, the four reverb controls on the JVM410H have been replaced with four independent noise gates, each with its own threshold. Both OD1 and OD2 benefit from a new mid shift button which moves the mids from around 650 kHz to around 500 kHz with the switch engaged. The overall gain level of the OD channels has also been scaled back subtly for a smoother playing experience.

In his own words

We caught up with Joe Satriani himself on the Australian leg of the G3 tour, and he gave us the skinny on his new signature Marshall:

"The R&D for the JVM410HJS model started way back in 2009. After Sammy and I decided to use Marshall amps for our first Chickenfoot tour, Marshall approached me about a signature model. Marshall engineer Santiago Alvarez is the genius behind the amp, and he was able to create what I wanted and needed from a new amp for both studio and stage work.

"We took the stock JVM410, opened up the sound, made major changes to sound profile of the four channels and their three modes, added four noise gates, simplified and improved the FX loop, and tweaked the presence control... to name a few things!

"The end result is a huge sounding and very versatile 100-watt head. I used it to record Black Swans And Wormhole Wizards as well as Chickenfoot III. I used it on the Wormhole tours and subsequent 'Foot tours. It can be heard in the movie Satchurated 3D too, and on my current G3 tour.

"It seems to have just about every kind of Marshall amp sound in it. The line-out function is great for home recording, and getting a discreet signal for live monitor or front-of-house use. I'm loving it!"