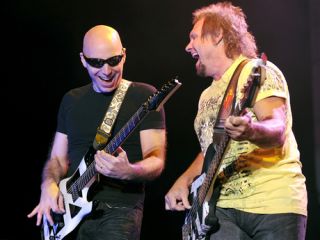 "The music is flowing and energy is there," says Joe Satriani (left) of Michael Anthony and the rest of Chickenfoot. © Tim Mosenfelder/Corbis

"If that was the tough part, we're in pretty great shape," says Joe Satriani about Chickenfoot's just-completed "Road Test tour," during which the band - which also includes Sammy Hagar, Michael Anthony and drummer Kenny Aronoff (filling in for Chili Peppers man Chad Smith) - played a series of no-frills, guerrila-style club dates to break in songs from their new album, Chickenfoot III.

"We're planning a full-scale tour for 2012," says Anthony. "Before we do that, we wanted to do something low-key to work things out. Come January, we'll play larger places in England and Europe, but it'll still be a quick run of shows. Ultimately, it all leads up to the big tour."

MusicRadar always likes to catch up with "The Foot," so we sat down with Satch and Anthony the other day to talk about how the new songs are going over live, what changes they've made to their live rigs and how Kenny Aronoff is affecting the band's dynamic.

The set you did on the "Road Test" dates was probably 80 percent the new album. What was it like playing shows where you've actually had to cut songs?

Michael Anthony: "It was pretty cool being able pick and choose songs instead of having to draw everything out. I mean, we did some jamming, but there has to be some limits. Sammy's a pretty talkative frontman, but even he runs out of stories to tell!" [laughs]

Joe Satriani: "I think we did practically the whole new record - the only thing we didn't play is the song Different Devil. We held off on that one because it's going to be released as a single in January, I think."

Anthony: "Different Devil should sound really great live. It'll be cool to do that when we do our full-on tour. What I like now is that we can really move songs around. We don't have to stick to an exact script."

Satriani: "Putting a set together is a funny thing: You want it to have ups and downs sand tell something of a story, and I'll admit that I had a hard time picturing how some of the new songs would translate without the production of a big show. Because we just played clubs for the initial run, we did things pretty bare bones. I was concerned about that, but as turned out, everything was fantastic. People reacted to the new stuff like they were old favorites."

Chickenfoot III is a bit darker in nature than the first album. How have you seen the songs going down live?

Anthony: "Really, really well. A song like Come Closer, which is a different type of thing for us, or Something's Going Wrong, which is way different from anything I ever did in Van Halen, to slow it down that much - the audiences were reacting."

Satriani: "The themes and the feel of the new songs seemed to have an exhilarating effect on the audiences. Exhilarating in a funny way: there's a kind of relaxed vibe to the songs on the record; they're very loose. So even though some of the things are darker and heavier, they still come as being fun."

Anthony: "You do a run of dates like this to test the waters, to see what's going to work. Luckily, we found out that it all works."

Beyond the fact that you couldn't take out the full production, was it strange to play such small places? You're all used to large venues.

Satriani: "It wasn't strange at all. We all have so much experience - playing clubs, theaters, arenas, outdoor festivals and so on - that we know how to work any size place we're in. This was a real blast. It was intimate, there was electricity in the air - every night felt very special."

Anthony: "Kenny...I view him as one of the band. I mean, Chad's in the band, of course. But you know what I mean - Kenny's part of Chickenfoot."

Satriani: "Kenny memorized everything in a day, and by the second day we were able to tell him, 'OK, now do whatever you want.' We had to tell him, 'We don't want to shock you, but when we get on stage, don't expect us to play parts from the album - we go off!' [laughs] And he got right with that. He loves to improvise and get crazy."

Anthony: "I'm locking in with Kenny, and obviously for me as a bass player, that's key. He does bring in a different dynamic. Chad is looser, whereas Kenny is more structured - not that that's bad. But we did notice that Kenny was loosening up as we went along, so he brings structure and swing to the table. Now he's not just playing our songs, he's performing with us."

"For a drummer, it's all about holding down the fort. With Chad, it's a fort full of maniacs! [laughs] Kenny's got some maniacs, too, but they're different breeds and sizes."

Satriani: "Plus, it's good now that we've got another bald guy in the band. [laughs] How could we not get along? It sort of takes the pressure off of me to constantly have to wave that flag."

Have there been any changes to your guitars and rig?

Anthony: "The only change on my end is that I'm starting to add some effects. I'm using MXR products, like an octave box and some chorusing. I don't want to fill things up too much, but I do want to complement Joe's sound and enhance the overall picture."

Satriani: "In the space between the two Chickenfoot outings - our last tour and this run of dates - I've moved completely to using the Ibanez JS2400. I did the Black Swans album and tour and Chickenfoot III with the 2400, and it's really something how going from 22 to 24 frets can affect your playing.

"You might not think that two extra frets can change what you do, but the difference can be huge. There were a few times on stage when I'd actually look at the neck and go, 'Now where's D? Where's E?' [laughs] It's funny now, but it wasn't so funny at the time.

"There's something ergonomically pleasing about having those two extra frets. Plus, you can play higher notes, which might not be so good for the general public. [laughs] And the guitar just sounds better to me."

As you said, one doesn't think that two extra frets would make such a difference - especially for somebody who knows his way around a guitar neck.

Satriani: "It's nothing I've talked about before. Doing these shows has been very important for me as a guitarist on stage. I felt really, really good, and I was able to go from traditional playing to all-out craziness, a real loss of control almost. So with the 2400, it's been an ergonomic thing, but I feel very much at home with it now. Plus, I think the balance between the bridge and neck pickups is right there. We hit a really good, sweet spot.

"The only other change is that I started using this reverb pedal called Wet. I got it about nine months ago, and it's great. It's got such a nice reverb tone to it, it's almost mysterious. I've tried a bunch of things over the years, but the Wet pedal really impressed me."

Three And A Half Letters is a very timely song. What's been the response at the shows?

Anthony: "Over the top. People are actually chanting the choruses and raising their fists. You can see they really relate to the lyrics, that it's a statement on our economy. It touches them."

Satriani: "It's a rallying cry. It's real life. Even if the people at our shows have jobs, we all have families and extended families, so we all know people who are out of work. The economic downturn affects everybody. People need to be able to raise their voices.

"Something strange I noticed: There's always a few people in the crowd who think that Sammy's having a senior moment on stage because he's reading from the actual letters. I can see the looks on their faces, like, 'Why is he reading the lyrics? Doesn't he know the words?'" [laughs]

Has Chad seen any of the streaming concerts and YouTube clips?

Anthony: "I think he has seen some things. Even though he's out there with the Chili Peppers, he keeps up with us. He texted me recently and said, 'How's Kenny working out? If he's not kicking your ass, I'm gonna fly back and show him how it's done!'"

Satriani: "I got a text from him today, in fact. He was in London, and his driver had a huge Chickenfoot tattoo on his leg. How insane is that? We're communicating with him, and he's doing great."