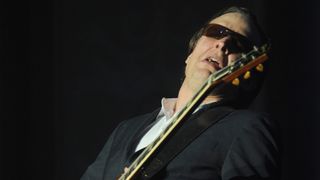 The stage was set beautifully for the release of Afterglow (due out 30 October), the group's third offering and their best overall. But trouble broke out late last August when, during an interview with ABC News, Hughes said that Afterglow could be the quartet's final record. Stating that he needed to be in a heavy touring band, Hughes put the blame for Black Country Communion's sporadic roadwork squarely on Bonamassa's shoulders, citing the guitarist's extensive solo tour schedule.

Bonamassa was wounded by Hughes' assertions - and then angered. A BCC gig that had been scheduled for 5 January at the Wolverhampton Civic Hall in Wolverhampton, England, was cancelled. Soon after, Bonamassa tweeted, "I am very sorry about the Black Country Communion canceled gig. But principle still stands for something in 2012. I ready to move on." Hughes' tweeted response confirmed the icy conditions between the two parties: "Me too."

Back home from a swing throughout Southeast Asia and Australia (with a gig in Honolulu thrown in for good measure - nice), and ahead of a two-month US run, Bonamassa sat down with MusicRadar to discuss the current state of Black Country Communion.

So, obviously, it's been a difficult time for the band.

"The weird thing is, I heard about this nonsense second-hand. You know what I mean? I'd look on Blabbermouth and I'd see 'Glenn Hughes, and I'd be like, 'Oh!' 'Cause I knew he was doing the press tour. See, going into making the record, I had a lot on the table, a real whirlwind of activity. But everybody knew that was the deal for me. These were all facts on the table, and everybody knew that. And we had a great time making the record.

"The impetus of the songs was really on Glenn's shoulders, and he was happy to take the responsibility. He came up with some good songs. Listening to number three, I'm not sure if it's our best one. One is the best, or at least it's my favorite. The first one was the shit - it even sounded like 1972.

"But a lot of this stuff I fell into second-hand - you know, I'd read a blog, or I'd read this or I'd read that. I was going, 'Why all of a sudden is it my fault?' That I'm doing what I said I was going to do for the last three years, and now because somebody changes his mind, that's now my fault? At first, it didn't really faze me. You know, journalists do like to take liberties; they do like to start shit. But then it's time and time again, and then I read the Classic Rock article, and it went from slightly annoying to supremely not cool.

"The thing that became more than slightly annoying to me was getting e-mails and negative stuff coming at me, basically unsolicited, from kids in Brazil going, 'My lifelong dream is to see Black Country Communion, and because Glenn Hughes says you don't want to do it, now you're the fucking blues antichrist.' I wouldn't have done that to anybody. No matter what the situation is internally, you never air that dirty laundry and those grievances out in public. You call me on the phone, you know? And he never did.

"So, at the end of the day, when the time came for the gig... there's two things that I told myself, the threshold I'd never cross: I'll never make music that I don't want to make. I'd rather be living in a trash can on the street rather than do that. But I love the music we make with Black Country Communion, so that didn't come into play.

"But I'll never do a gig out of obligation to just fleece the fans and have this 800-pound gorilla in the room, with everybody going, 'Well, this could be the last' and waiting for Glenn to make some stupid fucking announcement on stage. We'll all have egg on our faces. When it came down to it, I said, 'At this point in time, it's probably best for me to just step away from the situation and chill out - and not break up the band, not say it's over, and not say anything other than 'I choose not to participate in that event at this particular time.'

Has anything changed in the situation at all?

"The state of things is the same as it was a month ago. You know, if everybody gets on the phone or gets in a room - and most likely it's going to have to be me and Glenn to hash this thing out - then I don't rule out ever doing it again. At all. I'm actually particularly proud of this facet of my career. I just rule out doing it in the short term and next year, because at the end of the day, I'm not going to be bullied into doing something that was never on the table from day one because some cat changes his mind and figures out that it's the best thing he's got going on - thus it's going to drag us all into it. That's not fair. It's not fair to me."

"Well, I was hurt. I mean, here's quote-unquote your friend, and to make matters worse, it's one of your musical idols doing it, too. And all of a sudden I'm like persona non-grata and the reason why some Brazilian kid isn't getting his hard rock fix. That's wrong."

But in an interview, Glenn said that if it was going to be the last album, he'd better make some "pretty wild and epic tracks." Did he say anything in the studio to indicate that he thought it would be the last record?

"Well, see, here's the rub, too, and this is where Kevin Shirley and I get out noses bent out of shape. At the end of the day, he doesn't come in and tell me where to play, tell Kevin where to put the faders, and tell Jason how to play drums and Derek how to play keys.

"I mean, to hear these songs come in initially, they're pretty rough sketches. I mean, yeah, they're Glenn's tunes, but to take sole credit for it all and not to give any credit to Kevin - you know, I'm out; he doesn't like me. But to give no credit where credit's due, I mean, Kevin really makes these things what they are. And you read this stuff and you're like, 'OK, fair enough. You said you needed sole writing credit for everything. And dude, it's OK. It's not about that… ' But to make it like we're a bunch of studio musicians is laughable. Why treat us like we had nothing to do it in the first place, like he could get any bunch of minions in there and do the same thing?

"That's the way I read a lot of this stuff. It's 'All hail King Hughes, for we are all your surfs and servants.' It's not true. Bottom line, it's not true. I choose not to participate in that behavior. This thing has become a bit transparent in my world, to see where the true colors are."

Have you picked up the phone? Are you waiting for him to do so?

"I don't feel the need to pick up the phone. I said my piece. I sent him an e-mail a while ago and said, 'I don't really appreciate this. I don't mind a little wind-up on the record - that's how you sell records. But don't make it TMZ.'"

It's unfortunate this is all going on, because the record is so strong.

"I'm a little close to it. But conceptually, I think it's the most cohesive. I think that my lack of participation in the writing and singing helps it in that way. It used to be eight songs with Glenn singing, two with me, and then a few harmony vocals, which always meant that every four songs there'd be a blues-rock track.

"We did this in six or seven days all in. The second one took the longest, but we really didn't need all the time - we had two weeks, and I think we used 11 days. The first one was four and a half days of shear terror. That's kind of why I liked it - I think it yielded the best songs."

The song Crawl on the new album features so many different guitar sounds. Was that live off the floor, or were those effects put in later?

"That song was for the second one, but we never used it. The album ran very long, so we kept the track and used it on this one. I think mostly it was cut live, but Kevin edits most of this stuff in the takes. He kind of builds the solo, unless it's just cohesive all the way through. I don't really know. It's like I eat the hamburgers, but I don't know how the cows are killed. That mostly likely was cut between takes. Halfway through the solo of take two, I might have hit the wah-wah pedal or some flanger, and then he grabs something from take one. But it was all done with the same rig. It wasn't like we overdubbed different tones."

Bonamassa warms up before playing with BCC in Wolverhampton in 2011. © Christie Goodwin

Did Dandelion start as an acoustic number, or did it begin with the heavy guitar riff?

"Glenn played the acoustic on that, and it was really wonderful, like a Jethro Tull thing. When he started showing me the riff, I said, 'You can show me the riff all you want, but you have such a feel for this. You should play it.' That was the right way to go. He had a really great take on it. The heavy riff, we built that up over the three or four hours we worked on it."

Glenn sings his ass off on Midnight Sun. Truth be told, he gets stronger and stronger.

"Yeah, what can you say about that voice of rock? He's a freak of nature. I mean, there's a cat who can sing anything that comes into his head. Very few people have that ability. Aretha Franklin has that ability. Steve Marriot, for a short period of time in the '70s, he had that ability and it kind of went away. Glenn has wonderful control over his voice. You read these articles, and it's kind of unfair to him: 'For his age…' For any age! I defy you to find a 20 year old who can sing like that. Hats off, and rightfully so."

Well, it's a great record. It'd be terrific to see you guys out there.

"You know, never say never. But he's going to have to explain himself first."

Because it's not all about your touring. Jason has the Led Zeppelin Experience, Derek is playing with a few people…

"If Glenn had just replaced the word 'Joe' and used 'the guys' or 'we,' I would've had no problem with anything he said. But the fact that it was used to really cattle prod me... I'm not going to cancel shows. I have to book three years in advance to get theatres. It's my life. That's what it is. But I… I think it'll be fine. I'm not worried about it."