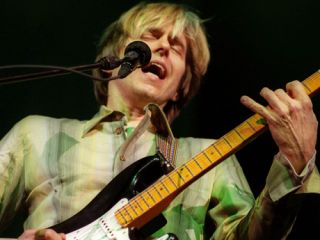 Eric Johnson takes his time making records. During his 34-year career, the guitar master and noted perfectionist has released only seven studio albums. He doesn't like to rush touring, either: his upcoming UK jaunt is his first in nearly 20 years.

"It's not that I don't want to do things quicker or cover more ground," Johnson says. "I just get very caught up in what I'm doing, and I don't want to put out a record or do a tour until the time is really right.

Lucky for UK guitar fans, the time is drawing near, and come July, Johnson is set to perform a series of shows that will showcase material from his 2010 album, Up Close, along with selections from his rich back catalogue. But first Johnson is heading back out for more dates on the 2012 Experience Hendrix Tour. We caught up with him as his bus made its way to Orlando, Florida.

So here you are, about to do some more Experience Hendrix dates.

"Yeah, I'm doing about three weeks. Everybody else has been out for about a week, so I'm joining them in Orlando. The whole thing is so much fun. I love Jimi's music more than I can say. The first tour I did was great because I got to meet Mitch Mitchell and Billy Cox and hang out with them."

You've done a few Experience Hendrix tours. Musically, what do you get out of them?

"Well, like I said, I love Jimi's music, so to get a chance to play it is a gift. I always try to work up a song that I've never played before. This time I'm doing Little Miss Lover from Axis: Bold As Love, and I also worked out Waiting For Tomorrow, which is a lot of fun to play.

"Doing these songs allows me to understand Jimi more, and it lets me expand my musical vocabulary, too. I definitely grow as a player and a musician from these tours. And it's cool to play in front of so many kids and young people and bring this music to life. A lot of these people who were too young to have seen Jimi - their mouths just drop open when we play these songs. That's why I love these tours - the reactions."

Speaking of touring, some folks are saying your upcoming run through England is your first ever - it's been that long.

"I have done some dates in the past, but it's been a while. I'm excited - Europe and the UK. It should be great. I haven't been over there since the '90s, so yeah, that is a long time. I don't know why. I mean, I do know why, but there's nothing concrete I can point to. I haven't been to Japan or South America or Canada… I guess I've concentrated on the US - that and spending my usual 14 years per record." [laughs]

Given some of your influences and how much you revere British guitarists, it is a little surprising you haven't been to the UK in so long.

"It is, sure. I'd say it's a market we haven't given enough attention to. But I'm looking forward to making up for lost time. They have great audiences there, so many guitar fans - I think it's going to be a blast, I really do."

Have you talked to any British guitarists you're friendly with? Will you be joined on stage by some guests?

"Wow, well, I can always dream, right? [laughs] I don't know… I've hung out with Jeff Beck a few times, so I'd love to invite him out. I don't know what he'll be doing then. I definitely have my heroes and my favorite players, so anybody who'd like to come out, sure, that'd be great."

Who's going to be your backing band?

"Wayne Salzmann on drums and Chris Maresh on bass. They've played with me on the last few US tours. I've been playing with Chris off and on for quite a few years, but Wayne is relatively new - he's only done about three or four tours with me. They're terrific musicians. You need a great rhythm section, and these guys are real cool."

How are you going to change up the UK setlist from what you've done in the States?

"I'm going to tweak it up. I'll put in a few new tunes and see what's working, what could be better. When I get home in April, I'll take a look at the set, maybe learn some new stuff.

"It's good to talk about these dates, actually - it'll make me focus on what I've got to do. Once in a while, we play a Clapton piece; I could do something of his. I've got to think about this. I mean, I do want it to be good." [laughs]

Have any of the songs from Up Close surprised you at how they go over live?

"I think people like Gem a lot. We play that song, and they dig it. They seem to like Fatdaddy pretty much. Folks like the song Austin, but that one's a little tough for me to sing well. The musical part of that song is there, but I'm a little hit and miss on the vocals."

Up Close came out in 2010. It's still a relatively new record, but even so, have you started writing for the next one?

"I have, actually - I've got a few things. I even went in and did some recording on some songs. They sound good, but I do want to get back in the studio and see what can happen. I recorded pretty quick, too - one tune was totally live in the studio. If you go in with the idea of cutting things live, it can move pretty fast.

"I mean, I don't ever want to rule out doing overdubs and working on production stuff, experimenting and creating. But I think if I can make a larger piece of the vision to be stuff that's cut live in the studio, then I can reduce a lot of wasted time. That's a goal, at least."

You recently came out with your own signature guitar speaker from Eminence. How is that working out?

"Pretty great. I still use some old speakers, so I kind of mix them in my cabinets. But the Eminence speakers are cool. We've got them to a point where they're right there, you know? We're going to keep tweaking them. The best thing is that there's no new speaker that sounds like them. We were pretty relentless in pursuing an older, vintage style.

"Sound-wise, I'm coming close to what I hear in my head. I know I always say that. One day I'll get there… I hope."

July 2012 dates for Eric Johnson are as follows: