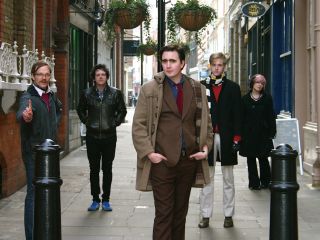 Thinking man's indie band, Art Brut, recently released their third album, Art Brut Vs Satan. Rather than recording and producing in the UK as per previous releases, last December saw the band head off to the States (Salem, Oregon to be precise) to record. In an even bolder move, they enlisted the help of Pixies genius Frank Black in the production seat to give the album his signature off-centre treatment.

This is the furthest the UK band have ever travelled to record, so was it worth it? MusicRadar hooked up with Art Brut's resident dandy and musical force, Jasper Future, to get his take on recording Art Brut Vs Satan with Black - the sound, the songs, the mandatory growing of facial hair…

Where did you record the album?
"We recorded the whole thing in Salem, Oregon in sub-zero temperatures. Salem masquerades as the state capital but never in my life have I heard the word 'capital' applied to four medium sized streets and a mall. It was, however, an extremely friendly place. I'm pretty sure we knew everyone there after the first four days."

How long did it take to record?
"It took us 10 days to record and three days to mix. I don't know what U2 are going on about, spending months on their albums. What are they doing all that time? In the absence of any exciting drug problems, I can only imagine The Edge has at least six hours set aside each day for crocheting Bono's socks."

(Above) Art Brut vs Satan vs Frank Black: The video diary

On production and personal heroes

What was he like as a producer?
"He saw the recording process exactly as we saw it. There was very little overdubbing and guitar trickery. We recorded it all live with Charles concentrating on song arrangement rather than on specific sounds. He was everything we could have expected and more."

Did his style affect the Brut's natural poise?
"I don't think so. He let the whole thing run very naturally. As we were playing it all live we got a chance to try and capture some of the energy from the stage show, which for us is very important. I can't imagine recording each part individually now. It seems a little contrived."

Did you let him play on the album?
"Unfortunately, we didn't get him to play anything. We wanted to ask but it was a little difficult to broach the subject. Everyone was slightly embarrassed."

What makes this album different from the others?
"For all the reasons I've mentioned, I guess. We managed to get a much rawer feeling from it this time. The last album (It's A Bit Compilcated (2007)) was very slick, which is what we were looking for at the time but we're back now doing what we do best: Punk as fuck."

What's your favourite song on the album?
"I like Mysterious Bruises as it was such a massive departure for us. Seven and half minute epics were not something I thought Art Brut would ever get to. It was all Charles' idea and we were all a little dubious about it at first, to be honest, but it turned out fantastic."

What's the best line on the album?
"Definitely "Why would you want to sound like U2/That's not a very cool thing to do?' in Slap Dash for No Cash."

(Above) The diary continues: That's how you record an album…

Which song took you the longest to record and why?
"'Mysterious Bruises', again. It was one of the few songs we did entirely with a click track and the rhythm in the chorus just kept throwing us off. After we finally got it we swore we would never listen to it again. I've only just been able to sit though it without feeling the sensation of drumsticks bouncing off the back of my head…"

Give us one piece of album trivia…
"Ian, Mikey and myself did not shave our top lips for the entire time, thinking this would result in a band bonding moustache experience. Sadly, I just ended up looking like a 14-year-old boy who's too embarrassed to talk to his father about razors and deodorant. The other two looked like Tom fucking Selleck."

(Above) That latest album cover. Is that what hell looks like?

Who designed the cover?
"This was designed by the amazing Jeff Lemire. he's a great comic book artist. Eddie hooked us up with as he seems to have all the good comic book connections these days. I'm very jealous…"

Art Brut vs Satan is out now. The band are touring the UK right now. See the site for details.

Liked this? Then try:
Kings Of Leon interview live in Pittsburgh
10 things you should do before going into a pro recording studio
14 more outrageous guitars from the internet