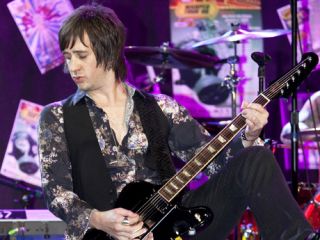 On the All-American Rejects' new album, Kids In The Street, guitarist Nick Wheeler decided to "get less tricky and just play." Whereas he traditionally employed numerous alternate tunings - "every song, it seemed, had a different tuning going on" - for the group's latest batch of tunes, Wheeler stuck to basics.

"It's really made writing easier and my playing more spontaneous," he says. "There's a reason why standard tuning is standard. Now I listen back to the songs and it's like, 'Whoa - I'm a real guitar player!'"

We spoke with Wheeler about how he and Ritter wrote the new album, what it was like to record with Greg Wells, his love of Gibson Firebirds and boutique effects pedals, and how he channeled his inner Richie Sambora.

It's been said that before making this record, Tyson was having a bit of a bad time - he had some issues with drinking.

"Actually, I think the problem was, he was having too much of a good time! [laughs] It's one of those things: We've been doing this for 10 years. He had to graduate high school early so we could do this band. He never really got to sow any of his oats. And you know, we're from Oklahoma - everybody we know from home is married, has kids, or they're getting divorced and they're onto their second marriage. Everybody grows up in different ways, and when you're in a rock band, that can be strange.

"I like to stay home and be by myself. Tyson's the complete opposite: he likes to be out and experience everything. So I think he just got mixed up with some bad kids and had a lot of fun. I had my fun when we toured the first record; Tyson did his later.

"It never got too crazy. None of us has ever been self-destructive. But there did come a time when it was like, 'OK, maybe we should just get out of here and start thinking of writing a new record.'"

So you basically grabbed him and took him on a writing trip.

"Pretty much. We always liked to go on writing trips and go to these places where there's nothing else to do but write. So I booked a place in the Sequoia Grove Forest, piled some gear in the car, just a couple of acoustic guitars and a keyboard, and we went off and wrote.

"It took a bit of us writing and realizing what it is that we do. We got down to business. Plus, Tyson dug deeper with his lyrics. I think it was therapeutic, a way of bringing the reality back in."

Did you have a different agenda making this record than on your previous ones?

"I think the main thing is, we're kind of different people each time we write and put out a record. Three or four years go by between each one; everything changes so much. We try not to put any limitations as to our instrumentation and how we write, what songs we record.

"It's funny: We're one of the few rock bands that gets played on pop radio - you know, the stations that play music that all kinds of people of all ages like. I think it's because we're ourselves; you can't pigeonhole us. People tried to for 10 years, comparing us to all of these bands, but a lot of them aren't around anymore."

You worked with Greg Wells on the new album. He's known mainly for straight-up pop - Katy Perry, Adele, One Republic. What was it about his resume that you liked?

"It wasn't really his track record that attracted us, it was his overall musicianship and the way he understands music. If you can play an instrument and you go into a room with Greg, chances are he'll be able to play it better. [laughs] It's pretty insane.

"Greg is a great moderator, a sounding board. If the band was having an argument and didn't know what to do with an idea, if we tried something out and didn't know what to make of it, he was that other perspective that could make all the difference. He didn't live with our songs for two years; he only knew about them for a few weeks. He could be objective.

"We did some brave shit on this record. We recorded guitars and made them not sound like guitars. Or we recorded the band live with a 32-piece orchestra - which we had to do in two hours, 'cause they're union guys and they're on the clock. It was exciting. And then one day, Greg brought a bunch of synths into the studio and said, 'Let's try these out!' There were a lot of bleeps and bloops going on. We had fun, tried out some new things. There were some magical days in the studio."

Someday's Gone is a very cool thrashy tune. It looks like you're playing an ES-335 in the video - is that what you played on the track?

"Actually, in the video I'm playing a Gibson Midtown Standard. It's got the same pickups as a 335 and the Bigsby, but it's got a flat top. I haven't played it that much, and now that I think of it, I didn't play it on the track - I played a Firebird."

"I kind of lucked into this whole Firebird thing. Back in the day, I fell in love with how the guitar looked. It's the Southern Rock staple guitar. I just wanted to be seen holding one. But it also works with the sound of the band: Mike goes in for these big, fat chunky rhythms, but I'm a little bit cleaner and tend to play a lot on the top strings. Firebirds work perfectly for me and the band. I've been playing them for the last eight years."

You play a Firebird in the video for Beekeeper's Daughter, so one would assume it's on the track, as well.

"Absolutely. That's the one!"

Nice wah-wah solo you do there.

"Actually, that's a talk box. It's been 30 years, and I finally got a talk box back on the radio!" [laughs]

So who would your talk box influences be - Peter Frampton? Richie Sambora?

"Technically, Richie Sambora - I grew up listening to him. But I wanted more of a retro sound for this. I thought it'd be fun, so I just threw it on the demo. After I did it, I was a little insecure about it, but everybody loved the idea, so I said, 'Sure! I'll put it on the record.'" [laughs]

Did you ever listen to Joe Walsh's use of the talk box?

"Not until recently. Classic rock is something that's always around, especially in Oklahoma. Yeah, what did he do that on - Rocky Mountain Way? That's great stuff."

Do you think you might do a signature model with Gibson at some point?

"Oh, that'd be amazing. But unless you're friggin' Jimmy Page or somebody… I know they did one with Billie Joe Armstrong, but he's paid his dues. I'm just happy to get some guitars from them when I need them. A signature Firebird would be cool - we'll see."

How do you and Tyson demo songs? When the two of you went off to the cabin to write, were you able to make elaborate demos?

"It depends on the song. If the song is good, we'll just do acoustic guitars and a vocal and that's enough. But sometimes the treatment of the song really matters. There's a song on the new record called Bleed Into Your Mind, and for that we took that demo as far as we could until we couldn't think of anything else to put on it.

"I've gotten into Guitar Rig, which is totally amazing. The tones are so great. There's demos I did with Guitar Rig, and the sounds were so good that we just kept the tracks for the album."

Are there any stompboxes that you're particularly into?

"I'm a big lover of boutique pedals. Whenever we make a record, the producer or guitar tech will usually introduce me to a whole new world of shit, and I'll always try to buy the pedals so I can reproduce the songs live. Z.Vex makes great pedals - one of my go-to pedals is the Super Hard-On. I also love the Menatone Red Snapper. I used that one a lot.

"I like to use the Red Snapper with an Vox AC30. It's one of the AC30s made in China. I just switched the tubes out. It sounds amazing. So a Firebird into a Red Snapper into an AC30 - that's my go-to setup. You can't beat it."