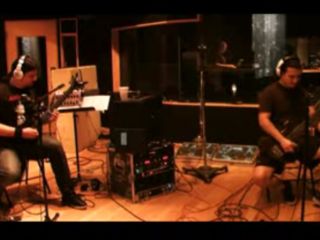 Trivium just wrapped their forthcoming album, Shogun, and have posted a new webisode (their second) with behind-the-scenes studio footage.

For Shogun, the band left the comfortable environs of their home state of Florida and headed to Nashville to work with the very happening producer Nick Raskulinecz (Rush, Foo Fighters). According to guitarist Corey Beaulieu, the group was more disciminating song-wise than on previous efforts. Of the 40 or so songs they wrote, they only demoed 15.

"When we went in, we thought, 'Hey, these songs are good enogh for the album already,' but we've overhauled almost everything. Nick has encouraged us to explore so many new ideas that we never would have thought of."

Guitarist and singer Matt Heafy is no less enthused. "We made a cohesive, epic metal album that combines all of the ingredients of everything we feel we have ever done 'right' musically, while adding a new direction that the music called for. We had so much fun creating this album and hope our fans feel that energy when they listen."