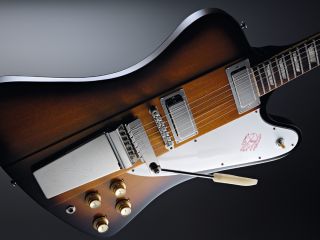 Now that is one seriously good looking 'bird...

The announcement of the Gibson Firebird X was a masterclass in cage rattling. For many, Gibson's first mistake was calling it a Firebird, given the heritage attached to that name.

You see, since its launch in 1963, the classic Firebird V has secured its status as a bona fide blues and rock 'n' roll icon. And that didn't happen by accident: sketched out by car designer Ray Dietrich, the Firebird was the first guitar Gibson set out to market as definitively 'cool' - an adjective not often used in the same sentence as the Firebird X.

The beauty of the classic Firebird V is more than skin deep, though. The guitar of choice of blues legend Johnny Winter, plus rockers such as the late Steve Clark of Def Leppard and Foo Fighters' Dave Grohl and Chris Shiflett, is as famous for its punchy tone and impressive sustain as for its rock 'n' roll aesthetics.

The Firebird was the first Gibson guitar to feature a sustain-boosting neck-thru-body construction. Its neck and central body section are shaped from a nine-piece laminate of mahogany and walnut, with a pair of mahogany wings spliced on to complete the body. The wings are thinner than the centre core, which gives the Firebird V its distinctive 'stepped' profile.

The Firebird was originally offered in single, double and triple mini humbucker-equipped formats. In a bold move, Dietrich designed his classic with a 'reverse' body shape, which, in contrast to a Fender Stratocaster, featured the longer of the guitar's wings on the treble side. In a further poke to the ribs of design convention, that Firebird came fitted with chunky banjo machineheads.

Like other innovative Gibson guitars of the '50s and '60s (the Flying V and Explorer), the Firebird V wasn't a runaway success during its original run. It was replaced by the equally low-selling non-reverse model after just two years in production.

These days, you'll find reverse and non-reverse Firebirds in the Gibson catalogue. Aside from a few hardware tweaks, the Firebird V 2010 is nigh on identical to the original '63 model. You see, it was always a brilliant guitar; it just took a while for us to figure that out.

1965: The non-reverse Firebird design is launched

2010: The banjo tuners are replaced by gearless Steinberger units

2011: Gibson releases the self-tuning, effect-loaded Firebird X to much controversy