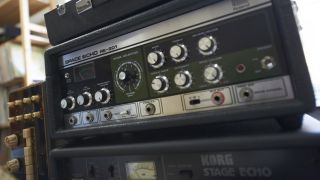 You'll get lost in space with this classic tape echo

By the mid 50s, Les had used the effect on a string of hit records. At that point, it also became the signature sound of rockabilly thanks to the slapback echo on Elvis Presley and Carl Perkins´ records cut at Sam Phillips´ Sun Studio in Memphis, Tennessee.

Commercially produced echo units had been available since the 50s (the WEM Copicat was a big seller in the UK in the 60s), but none were as advanced as the Roland Space Echo range, launched in 1973.

Built into a robust wooden case, the Space Echo offered more control over its effects than any of its forebears. The first models, the RE-100 and RE-200, were succeeded the following year by the RE-101 and the model that tone junkies now consider the pick of the litter, the RE-201.

The RE-201 is the echo box that rockabilly king and ex-Stray Cat Brian Setzer relies on for his Sun Records-style slapback - check out Setzer playing Sleepwalk on YouTube for the ultimate RE-201-fuelled performance.

It´s also the unit that Radiohead guitarist Jonny Greenwood insists on for his aural experiments, and it´s the sound of classic dub reggae cuts by legends such as King Tubby and Lee ‘Scratch´ Perry.

To make the RE-201 and other Space Echo models work, a loop of tape is drawn across a series of record and playback heads by an internal motor. The input sound - a guitar lick, for example - is captured on tape by the recording heads.

By the late 80s, many musicians had abandoned analogue gear in favour of digital. The first digital Space Echo, the RE-3, debuted in 1988. In 2007, Roland released the Boss RE-20 Space Echo Twin Pedal. As excellent as the latter unit undoubtedly is, it can never quite match the legendary tone and warmth of the highly prized original. Now, that´s something that´s worth repeating.

The iconic RE-201 Space Echo is unveiled