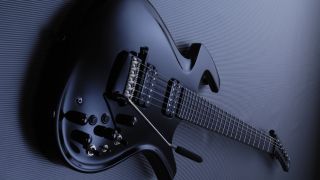 Lightyears ahead of its time.

With the Parker Fly, it's not just the shape that's radical.

A pioneering collaboration between luthier Ken Parker and electronics expert Larry Fishman, it boasts a carbon/epoxy exoskeleton, which surrounds the wood core - with a strikingly minimalist headstock, it makes the Fly one light guitar.

Upon its unveiling in 1993, it was the first six-string to give players the ability to mix signals from magnetic and piezo pickups, offering an as-then unheard of wealth of tones.

The Fly's various models have encompassed just about every combination of woods, necks and vibrato/bridge units. Notable incarnations include the MIDI Fly, with built-in MIDI facilities to control remote synthesisers, and the nylon-strung Spanish Fly.

The cut-price P Series gave less minted players a slice of Fly in 2005, while 2009's DragonFly offered a more traditional look. Yet, despite finding its way into the hands of players as diverse as Adrian Belew, Joe Walsh and Matt Bellamy, the Fly continues to divide opinion - and that's exactly what makes its design so timeless.

The affordable P Series makes its debut, opening up the Fly to a wider range of players

A redesigned and more traditional body appears on the DragonFly