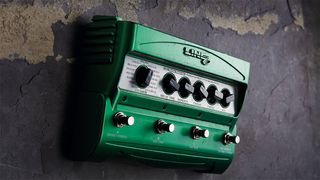 The green box of divine delay.

Back in the year 2000, delay pedals didn't offer a whole lot of options: you made your choice of digital or analogue, and that was about it.

The Line 6 DL4 delay modeller shook things up, boasting models of 16 classic delay effects that you'd struggle to get hold of without a formidable overdraft. The defining tones of the Roland RE-101 Space Echo, TC Electronic 2290 and Maestro EP-1 Echoplex were all available at the twist of a knob, alongside Line 6 originals, such as sweep echo, auto-volume echo and lo-res delay.

Most importantly, the sound quality was there, too, and the DL4 quickly found its way onto the 'boards of countless pro guitarists, who loved the ability to instantly access three presets and tap tempo, not to mention the 14-second looper.

Since the DL4 was introduced, Line 6 has used its sounds as the basis for other effects units, including the Echo Pro rack delay, Echo Park compact pedal and the M series stompbox modellers, but its functionality and modelling ethos is something you'll find a tribute to in just about every digital delay pedal on the market today.

All of Line 6's DL4-derived delays appear in the M13