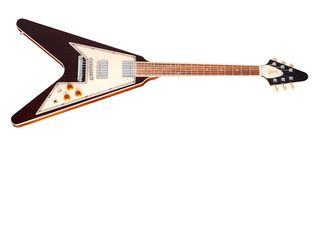 Even now, the Flying V's iconic outline stands out from the herds of hourglass-aping guitar bodies. It's hard to believe, then, that this extreme instrument was introduced way back in 1958, along with another equally radical, the Explorer, as part of Gibson's Modernist series. Yet it was decades before either instrument achieved any real success.

 Back in the mid 50s, guitarists were beginning to view Gibson as old-fashioned. Sales of the Les Paul were in decline, and all attention was focused on Fender's sparkly new Stratocaster. Gibson needed something to reclaim the spotlight, and it had to be something modern - and the Flying V was certainly that.

The guitar got its name and shape from Seth Lover (of PAF humbucker fame), whose pickups were installed in the new creation. It had a korina body and neck, plus it was the first Gibson to feature through-body stringing.

Unfortunately, the guitar world just wasn't ready for the Flying V, and poor sales saw production grind to a halt in 1959. Demand set in again when The Kinks' Dave Davies got his hands on one, and a new all- mahogany V was launched in 1967, with Vibrola vibrato.

Flying V production continued to stop and start throughout the 70s and early 80s, despite Albert King, Jimi Hendrix and the Scorpions' Schenker brothers all flashing the Vs.

By the mid 80s, Gibson had to compete with the V-style axes being produced by Jackson, and so the company's new stripped-back Vs came with reduced price tags and optional locking vibrato systems. At last, the V took flight, as the hard rock and metal masses, including James Hetfield and Kirk Hammett, jumped onboard.

Since then, the V has continued to soar: the Flying V '67 Reissue debuted in 1990, while a limited run of bonkers-looking Reverse Flying Vs was released in 2007. Its shape is still among the most imitated of guitar bodies, and Vs from the likes of Dean, Jackson and ESP continue to be treasured among metal's elite. Its ascent may have taken several decades... but, finally, respect for the Flying V is at an all-time high.

Gibson introduces the Flying V alongside the Explorer

The Flying V returns with all-mahogany construction and vibrola vibrato

Flying V reissue launched, based on the 1967 mahogany model

499 limited-edition reverse-bodied Flying Vs are made