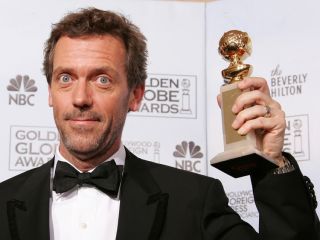 It's Blues Week on MusicRadar, so we just had to report that Hugh Laurie, the celebrated star of the hospital drama House (that's what he's known as in the US, anyway), is set to record an album of what he calls "New Orleans blues."

Laurie is booked to hit the studio with acclaimed producer Joe Henry, who has worked with artists such as Elvis Costello, Aimee Mann and Allen Toussaint. The Golden Globe-winning Laurie, though itching to lay down tracks, is well aware that past musical efforts by actors haven't always been well received.

In a press statement, Laurie said, "I am drunk with excitement at this opportunity. I know the history of actors making music is a checkered one, but I promise no one will get hurt. I am particularly thrilled to be working with Joe Henry, who has produced some of my favourite records of all time, and I can't wait to get started."

While it is true that albums by actors such as Bruce Willis, Keanu Reeves, Steven Seagal and Eddie Murphy have been savaged by critics, Jeff Bridges recently won accolades (and a pantload of awards, including an Oscar) for doing his own singing and guitar playing in the movie Crazy Heart.

Laurie has signed a deal with Warner Music Entertainment and will go into the studio in the coming months. Stay tuned.

In the meantime, we couldn't let a story about 'Hugh Laurie: musician' pass without reminding you of some of the great work he did with Stephen Fry...