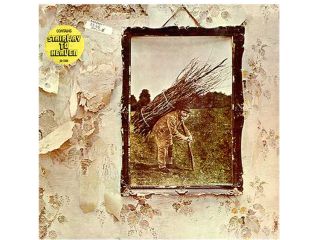 You-know-what is on Led Zep IV

Led Zeppelin's Stairway To Heaven is undeniably one of rock's classic songs. But what does that mean on a monetary scale? In a recent article, Conde Nast Portfolio did some numbers crunching, and the figures are staggering.

Publishing royalties
Zeppelin hasn't licensed Stairway To Heaven for movies or commercials. But songwriters Jimmy Page and Robert Plant and Warner/Chappell, the song's publisher, pull royalties from record sales, radio plays and live performances. Zeppelin has played Stairway at every performance since 1971, yielding somewhere in the neighborhood of $150,000 in royalties. Everyone from Frank Zappa to the London Philharmonic has also performed it, and when you take into account the plays it's received at hundreds of thousands of proms, weddings and bar mitzvahs, well, that's some serious money. (DJs and venues pay a small annual fee for the right to play it.) Estimated gain: $400,000.

Royalties from album and DVD sales total about $8.6 million. Plus, Stairway is a radio king, clocking something like 2,985,000 plays, netting nearly $2 million. It's also thought to be the best-selling piece of sheet music in rock history, with royalties of $1 million.
Estimated total: $12 million

The master recording
When Zeppelin and Atlantic Records sparred over the band's refusal to release Stairway as a single, the public had no choice but to buy Led Zeppelin IV. And they've bought Stairway on four different Zeppelin albums, sales of which have earned Atlantic and the band $500 milion. Throw in sales from DVDs and you've got another $48 million. And let's not not forget the $2 million deal the group did with Verizon for full-song downloads of Stairway - every time the track is clicked, that's more money to Zeppelin.
Estimated total: $550 milion

Potential earnings
With the exception of the Verizon deal and licensing the song Rock And Roll to Cadillac in 2002, Zeppelin have been notoriously cagey on exploring other commercial opportunities. Advertising experts estimate that Stairway could net as much as $8 million for just one campaign. But if Zeppelin want to cash in, they should do before baby boomers get too long in the tooth.

"If the target market is 45-plus, the song is extremely valuable," says Izzy DeBellis, executive creative director at Kirshenbaum Bond & Partners. "It's associated with every last dance you ever had. Prom - it was the make-out song."
Estimated total: $10 million or more