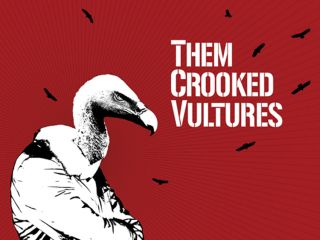 Them Crooked Vultures have set loose the studio version of New Fang, the first single off their self-titled debut album, and you can hear it right here.

Based on one listen, the brand-new band, comprised of Foo Fighters' Dave Grohl, Led Zeppelin's John Paul Jones and Queens Of The Stone Age's Josh Homme, is certainly worthy of the term 'supergroup.'

New Fang opens with a splash of Grohl's swinging drums and segues nicely into a syncopated, gritty guitar line courtesy of Homme. Jones' nimble basslines hold it all together - you sure wouldn't know that the Led Zep veteran is 63 years old!

All in all, it's a monster jam, full of awe-inspiring instrumental goodness and soloing galore.

You can hear New Fang on twt.fm or head over to Them Crooked Vultures' MySpace page - the track is streaming on both sites.

Twt.fm also links to Amazon.com, where the song is available as a download for 99 cents. But there's one catch: you have to wait until 3 November. The full-length album will be released on 17 November - presumably 16 November in the UK.

In related news, Them Crooked Vultures have announced dates for California, Washington and Oregon, which will precede their December tour of the UK and Europe and January dates in Australia and New Zealand.

Check out all the dates on the band's official website.