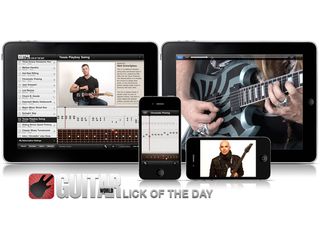 Available for iPad, iPhone and iPod touch, the app is a must-have for guitar players who want to continuously improve their guitar playing skills and broaden their repertoire in a fun and engaging way.

Guitar World Lick of the Day delivers a new and challenging lick to subscribers every day, with a one-of-a-kind feature set that enables guitar players of all skill levels to learn licks in a variety of styles.

Lick of the Day's features include:

"We gathered the greatest minds in the guitar universe and the greatest developers of guitar apps to create a monster of an app," said Brad Tolinski, Editor in Chief of Guitar World. "Guitar World Lick of the Day is an amazing instructional tool with a totally engaging experience. Will it make you the greatest guitarist in the universe? Anything's possible!"

Scott Roth, a principal with Agile Partners, shared, "Lick of the Day takes full advantage of the responsiveness, larger screen, and user interface elements of iPad," added Roth. "On the large, high-resolution display, we render bright, crisp music notation that scrolls in sync with the accompanying instructional video. And with a single tap, the user can toggle the notation between standard and tablature format."

Guitar World Lick of the Day is a free app that comes with five sample licks, and is available for iPad, iPhone, and iPod touch at www.itunes.com/appstore/

Information taken from official press release, for more visit the Lick Of The Day app site.