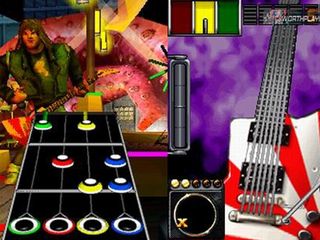 Who doesn't want to go on tour this summer? Now, with the upcoming version of Guitar Hero specifically designed for Nintendo DS, hitting the road to rock stardom is easy. Certainly easier than playing a real instrument.

The fine folks at Activision will be packaging the new version of Guitar Hero with a revolutionary Guitar Hero Guitar Grip peripheral that fits snugly into the DS, and a unique Guitar Hero pick-stylus that brings a new dimension to handheld gaming and the core gameplay that defines Guitar Hero.

Guitar Hero: On Tour continues to build on the franchise's signature easy-to-play, yet difficult-to-master addictive gameplay, allowing players to take their experience on the road wherever they go. Players use the Guitar Hero pick-stylus on the touch screen to strum their favorite tunes and create their rock 'n' roll legacy in career mode.

Fans can also join together to play co-op mode using a local wireless network, or battle each other in a Guitar Duel using new Battle Items unique to the DS platform. For example, players must blow into the microphone to extinguish a pyrotechnics effects gone wrong, or use the touch screen to autograph a crazed fan's shirt in the middle of their set.

Featuring five unlockable new venues, the game lets players personalize their experience by choosing the color of their axe of choice, selecting to play as one of six characters - two of which are all new and exclusive to Guitar Hero: On Tour - and outfitting their guitarist in numerous styles.

Personally, we can't wait to spend our summer on tour. Our well-paid lawyers are currently looking over tour riders and making sure that only brown M&Ms are supplied backstage. Now, that's what being a star is all about. For more information on Guitar Hero:On Tour, visit the official Guitar Hero website.