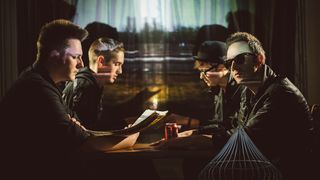 "You can try to mould things and pretend you know what you're doing in the studio, but really the songs go their own way."

James Allan, frontman/songwriter of Mercury-nominated Scottish indie four-piece Glasvegas, is renowned for three things: his yodelling brogue, his sunglasses and his tight-lipped approach to interviews.

Having met him, we think people must be asking the wrong questions. Get him talking about songwriting and he waxes lyrical with a series of amusing, left-field and insightful ideas about the haphazard art of music-making. So much so, that cousin and guitarist Rab takes a backseat throughout most of their joint interview.

As the band prepare for the release of third album Later… When The TV Turns To Static (due 2 September) we listened to their thoughts on - yes, the sunglasses - but also the theatrical qualities of reverb, hearing the angels in a chord and why every time you record, you're sending your song through the valley of death...

Following the success of the first album, were you properly prepared to go from a position of vulnerability to being a rockstar persona?

James: "I was always the same. All that happened is that I wrote some songs and people got aware of them and then they thought that my character was a reaction to the success.

"But I used to be unemployed. I bought these sunglasses from a joke shop because I wanted ones that looked like Roy Orbison, and I used to sit on the bus and go through the east end of Glasgow, which is like Bosnia, and people would be like, 'Who the f**k does he think he is?'

"A lot of it is just hanging on to some childlike, wide-eyed nature to your existence… In some ways, being in the band is just a step up from the tennis racket and the hairbrush."

You have a habit on following up on day-dreams (e.g. recording in Transylvania for 2008's A Snowflake Fell EP). Did you have any day dreams that came to impact this record?

James: "All of the songs. When you're writing a song, what do you do? You're basically making a tangible daydream. You can't really justify that as a formal job."

James: "I guess the commitment and the passion and the part of yourself that you surrender. I think that's the similarity between those people, but that wee spark of magic - the journey through the brain to the fingertips - that's not an organised job scenario.

"That's an artist's creation. With any brilliant songs, I don't think these people have been able to consciously sit down and calculate it. I don't think anybody's that good. I think there's some other magical thing that happens."

Tracks like Neon Bedroom showcase a greater sense of dynamism on this record. Did you make a concerted effort to vary the intensity?

James: "I guess there's got to be some sort of judgement, but there was very little [of that]. You can try to mould things and pretend you know what you're doing in the studio, but really the songs go their own way. You can try and drag it and distort it and sometimes it just won't go.

"That's the trickiest thing, when you've got the idea - that pure idea - and taking it from your mind and making it into a tangible thing. For that journey it has to go through a few different doors, through the valley of death, until it gets to that kid's bedroom or whatever that final destination is.

"It's tricky to do that without f**king it up along the way… It always seems to come together in that final minute of being in the studio. Almost like the song, all along, has just been winding you up, knowing that it was always going to work out, but saying, 'Let's see him sweat this one out!'"

If not personal experience, your songwriting is often based around deep-rooted empathy. Is that the case with Youngblood?

James: "All of the songs that I write it's me. If it's not directly about me it'll be close to something that I can relate to in some way. Sometimes, depending on the way that you see the world at that point it can wind up quite apocalyptic and have a real sense of danger in it and I think Youngblood's got that…

"It's one of those songs that when we first practiced it it just was a monster. It was quite 'tough' from the start, whereas other songs you've got to feed them up a bit because they're skinny!"

James: "That was a fun part, because we were thinking 'What goes in here?' And it's just a chord. I remember saying to Rab, 'Play it like it's the first chord you've ever played.' Because when you play that first chord, there's that enjoyment, that sort of innocence - you're hearing the angels!"

Reverb/echo plays a huge part in your guitar and vocal sound. What do you use? Any favourites?

Rab: "It's more the amount of them used than the specific one."

James: "There should never be a favourite one because one's not enough! It seemed to be something that we wanted to use from the beginning. We wanted things to bleed together and we just felt like it was something quite theatrical. With reverb it reflects in ways that you could never plan and that's the part that attracted us."

You've always had a close hand in the production. Do you think that's because you have difficulty letting go of control?

James: "I think at the beginning I'd just done it through default. My mates gave me a mic, a wee sound card and an eight-track, so me and him would sit in the house and we'd just mess about… I just enjoy being involved in it all.

"I guess you could look at it as a man that can't let go, but when you do have an idea about how something could be then, until it gets near that, you're trying to steer it… Our character is always going to be such a presence. We're Glaswegian for f**k's sake!"

Later... When The TV Turns To Static is available for pre-order from the official Glasvegas website now. You can also connect with the band on Twitter and Facebook.