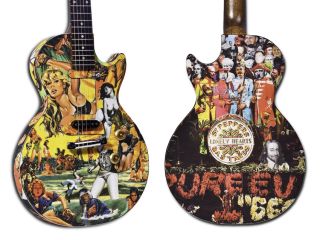 The Action For Brazil's Children Trust (ABC), has announced details of A Força da Rua (Force Of The Street). A contemporary street art project, it brings together 12 of Brazil and the UK's finest visual artists in an attempt to raise funds and awareness for Brazil's most vulnerable children.

What has all of this got to do with music? Well, Led Zeppelin legend Jimmy Page is a co-founder and patron of ABC, and Gibson Guitar is a long time supporter.

Gibson has provided 12 electric guitars to be specially customised, then exhibited at The Prints Space in London from 23 April before being sold at a high profile VIP charity art auction a The Cuckoo Club on 29 April.

ABC chose graffiti and street art to work with as it reflects the rebellious free spirit of music and Brazil's creative youth. Each of the artists' work for the guitars reflects how art and music should be accessible and available to young people without discrimination and have the ability to inspire and transform.

Wednesday 29 April @ The Cuckoo Club
An auction of Gibson guitars exclusively painted by 12 of the world's most celebrated Brazilian and British street artists. The auction event is by invitation only. Interested parties should contact Roberta at auction@forceofthestreet.com to attend.

Click here for more information on A Força da Rua.