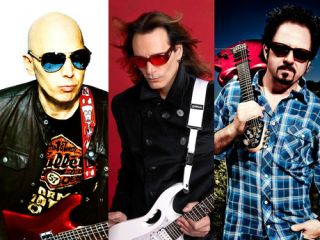 Since 1996, guitar fans have found their own kind of nirvana in G3, a concert tour organized by Joe Satriani that features him and two other guitarists - Steve Vai is the most frequent co-star - playing separate sets before teaming up for a three-way extravaganza.

It's been several years since the tour's last run (2007's dates were in North America and saw Satriani going toe-to-toe-to-toe with John Petrucci and Paul Gilbert), but the good news - for those Down Under, at least - is that 2012 will be another G3 year.

Just announced are a series of dates in New Zealand and Australia for March 2012, which will feature the G3 triple bill of Joe Satriani, Steve Vai and Steve Lukather. The show is said to last two and a half hours, and we have a feeling that some fairly decent guitar playing (oh, OK, it'll be mind-blowing!) will take place during that time.

Pre-sale tickets are already on sale, along with VIP packages that include a 30-minute Q&A with Satch and Va. Click here for more information.