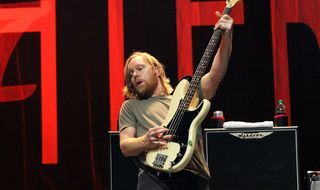 Part one of our interview with the Foo Fighters bassist (Image credit: James Palmer ./Retna Ltd./Corbis)

BASS EXPO 2013: Nate Mendel has seen the music industry from just about every level imaginable - from DIY punker in a busted van with his first bands Diddly Squat and Christ On A Crutch, to cult indie hero in Sunny Day Real Estate, to international arena headliner in Foo Fighters.

In the first instalment of our two-part interview with the US rock stalwart we discuss Nate's time in the late '80s DIY punk scene, what the future holds for Sunny Day Real Estate and why the band-wide fall-out during the recording of Foo Fighters' fourth album helped to make him a better player...

Don't forget to enter our competition to stand a chance of winning a Fender Nate Mendel P Bass worth £886/$1,199!

Your roots are in punk bands. What came first - bass or punk?

"Probably bass. I didn't set out to become a musician, I just started playing when I was an early teenager and really starting to become passionate about music. My friend and I had decided we'd start a band and that's the instrument I took up, because I had just gotten into The Police and Sting played bass, so I thought, 'That's where it's at.' Of course, that lasted about four minutes!

"I played around with the instrument for a couple of years on my own and then got heavily into hardcore punk rock and I pretty much listened to that exclusively for ten years. That's kind of what informed my idea of what playing should be - for better or worse. There were some cool things that came out of that - the idea that music is something you do collaboratively with friends without a professional agenda, so I appreciate having that background."

Are you conscious of not having a schooled background?

"Well, that's in contrast to Chris [Shiflett, Foo Fighters' guitarist], who grew up with older brothers that would show him how play. He took lessons and learned theory and was into the heavy metal scene in the 80s, where musicianship and chops were something people talked about. Nobody cared in punk bands, it was like: 'Is your band good? What are the lyrics? Is it fun? What kind of van do you have?' It was just 'lets get together and do shows!' And there were some people that could play and some people that couldn't, but it didn't have those people standing at the side of the stage going, 'Oh yeah, that's that chord I read about in Guitar Player magazine last month. Awesome.'

"I do have my moments of regret where I'm like, 'I wasted ten years listening to punk rock music when I could have been listening to Yes. Like, how much of a better player would I be now if Chris Squire was my bass idol, rather than the guy who plays for The Offenders? But that's not how it worked out! But then again, there are people that play two notes really well and it sounds good and then there are people who play a thousand and it's unlistenable."

When you went on to form Sunny Day Real Estate what did you want to differently as a bassist at that point in your life?

"Again, not having a technical background, I wasn't like, 'I want to take punk rock and add a jazz element or some crazy time signatures.' We just wanted to be different and we wanted the music to sound overwhelming, like the reaction that a lot of people have to My Bloody Valentine. That music just picks you up and spins you around and you experience it with your whole body. So that's what we wanted to do and we wanted to make something that had a full impact that the lyrics would be managing the emotional content of it and to make sounds that, to our ears, were different and compelling and that carried over into every aspect of how we did that band.

"I'm sure a lot of young bands have got that same drive and mission, like, 'How are we going to make this something that is new and fresh and can't be ignored?' That, for us, was the quiet/loud dynamic, which seemed different to us, but is now the signature element of music of that time period! But it was really powerful because it hadn't really been fully exploited up to that point.

"That kind of transition was the powerpoint for us and I think it worked in a lot of songs. Also having heavier music derived from our punk rock background and then having Jeremy's [Enigk, singer/guitarist] sweeter melodies on top of it. Again, I'm contradicting myself by saying we were doing something different, as looking back on it, that was also a 'thing' of that time."

What's the status of Sunny Day Real Estate at present?

"We're not doing anything. We had an 'interesting' reunion experience a couple of years ago where we got together out of the blue and patched up old relationships and differences and just wanted to do some reunion shows. It turned out great and it was a lot of fun and we sort of accidentally wrote a song and we were like, 'OK, why don't we try to do a record?' We spent a lot of time writing an album's worth of songs and then went to record it in Los Angeles - all of the writing had been done up in the North West where most of the guys are located - and the recording process just... It just fell apart. So that was probably the end of that band - if we couldn't make any new music, what's the point?"

What do you think it was about your playing in Sunny Day Real Estate that made you a good fit when Dave Grohl was looking to form Foo Fighters?

"I'm not sure how much of a good fit it was at first - and neither Dave nor I understood that for a couple of records. William Goldsmith, the drummer from Sunny Day Real Estate [and first Foo Fighters sticksman], and I both came from that band. We were scrappy players and we didn't want to look at a song and say, 'OK, what's the most direct way to get a melody across?' We'd go, 'OK, how can we make it weird? How can I express MY playing through this song?' It was a little bit narcissistic. So I came in like that and Dave had written all of these great songs - and Dave has always put a premium on simplicity. I thought, 'I'm going to be able to really do something with this, because there's just so much room.' The riffs were like '1-2-3-4, change chord, 1-2-3-4, change chord.' I thought, 'Oh my god, this is going to be a great landscape'

"So I tried to do that on the second album [The Colour And The Shape] and the third album [There Is Nothing Left To Lose] and then on the fourth album [One By One] that's when it just fell apart - and Dave and I had a discussion about what playing bass in the band means. It was kind of a throw-down, because I was recording parts for that album and then the producer [Adam Kasper] would call me back in to re-do it. He'd be like, 'It's all a bit complicated' and I would do them straighter. By the third time of re-recording a song, it was becoming frustrating for me."

One By One was quite well documented as a tough album to make. How did you clear the air?

"We had kind of a general blow-out on that record - with everybody - because the album sucked and we had to re-do it. But it was during that process of discussing the album sucking that everybody really had a chance to air their grievances. Dave was like, 'Hey man, why's it such a drag for you to come in and re-record these songs?' And I said, 'Well, because I thought that the part I did was good.'

"Having that conversation made me realise that I needed to approach what I was doing in the band differently. The good thing about that was that I think I'm a better player for the band now. I'd always relied on my instincts and said, 'OK, whatever I think is going to be interesting here is going to be right for the song' and that's not necessarily the case. It changed my perspective and I would listen to the drummer more and think about what was happening with the vocal melody and think about what the general purpose of the song was. My playing became simpler, but also more effective and direct and tighter, too."

Is there a specific example of how your playing changed?

"I never played downstrokes! That's like a classic, rock thing to do to achieve a certain sound with the rhythm section and I always strummed back and forward like a guitar player because it meant I could play faster. It was like, 'I can play quicker this way!' So that was one thing that I spent a couple of months concentrating on thinking about how I could do it effectively and it makes me a better player in this band."

Don't forget to enter our competition to stand a chance of winning a Fender Nate Mendel P Bass worth £886/$1,199!