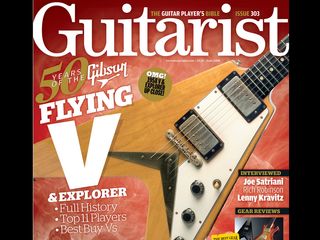 In the 50 years since their inception as misfits in the Gibson catalogue, the Flying V and Explorer have become rock icons.

If for some reason you don't know what all the fuss is all about, then how about checking out Albert King playing Move To The Outskirts on his V, or Dave Grohl using an Explorer back in 1995 with the first incarnation of the Foo Fighters line-up? What about Hendrix in the 1967 promo for The Wind Cries Mary, or The Edge´s famous Explorer, soon to be auctioned for charity, in action with U2 at Live 8? It certainly doesn´t get much cooler than Marc Bolan rocking Top Of The Pops with his Flying V.

Also, check out the angular Gibsons on offer in stores today, and the artists who made these guitars so revered. In addition, Guitarist´s June 2008 issue features a free DVD packed with tuition tips from the likes of Brad Davis, Buddy Whittington and Antonio Forcione. This teaser video gives you a sneak preview of what´s on offer: