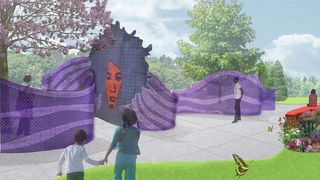 Seattle, USA native Jimi Hendrix is set to be honoured with a psychedelic park, due to open on 27 August.

The Hendrix Park is located next to Seattle's Northwest African American Museum, and was actually opened to the public in 2006, but the new design - pictured above - promises a whole new experience.

According to the Jimi Hendrix Park Foundation, the Park will be "awash in vibrant colours of the Pacific Northwest and will include ample green space for everyone to enjoy."

"Featuring an array of new improvements that reflect themes found in his music, Jimi Hendrix Park may include lyrical stepping stones, rain drums, a sculpted butterfly garden and/or many other features.

"These artistic representations serve as a beacon to youth, summoning them to unlock their imagination and encourage them to pursue their dreams."

There will also be a 'soundwave wall', and an assortment trees to provide some, ahem, Electric Shadyland.

Hendrix T-shirts are on sale now via Authentic Hendrix to help support the park plans.