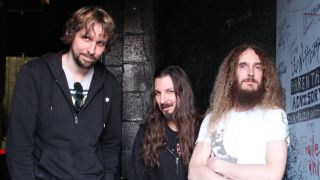 You can check out a generous preview of every cut on the new album by watching the above video.

The band's self-titled 2011 debut is already hailed as something of a classic, appealing to both progressive/fusion fans and metal aficionados. Discussing the band's musical chemistry, Govan told MusicRadar recently, "We have an unreasonable amount of fun playing together. Every 20 seconds, I'll hear something from one of the other guys that just makes me smile, or it terrifies me. But it keeps you on your toes. We all play for the same reasons."

Echoing Govan's sentiments, Beller said, "We've all been totally blown away by the reaction to the first album, the live album, and just us becoming a band in general. We're all beyond grateful for that. So this record, I feel like, is a response to that amazing response. It's like, 'OK, you dug all that crazy stuff on the first one, eh? Well, here, check this out.' We don't want to rest on our laurels. We want to push this thing further, as far as we can, wherever that goes."

A day after Culture Clash's release, The Aristocrats hit the road for what will be their most extensive US tour so far. The venue tour kicks off in Nashville, TN, on 17 July and includes select clinics at schools like the Atlanta Institute of Music, Berklee College of Music and more.

Culture Clash is issued by BOING Music, and you can purchase the album at the official Aristocrats store page. There is also a deluxe edition of the album, which includes a bonus DVD called Accept The Mystery: The Making Of The Aristocrats' Culture Clash.