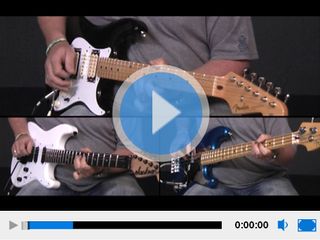 Britain's Greatest Metal Export Of All Time™ are now bigger than ever thank to what's already been a massive 2009, and now Fender MIC have issued three new signature models onto the Sea of Madness after their launch at Winter NAMM.

The Dave Murray Fender Stratocaster (£1,719) and Steve Harris Precision bass (£1,139) are based on instruments that the two Maiden mainman have used for the lion's share of the band's classic period, while the Jackson Adrian Smith San Dimas DK is based on a guitar built for Smith by Grover Jackson and sporadically used from 1987 onwards.

They all sound great and truly authentic and, to prove it, here's Guitarist's Simon Bradley with an exclusive video demo of all three.

The three guitars will be reviewed in the July issue of Guitarist, which hits the streets 9 June.