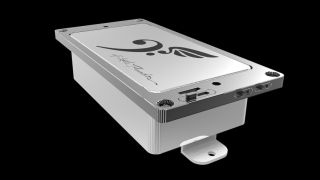 You could form rock's next power duo with A Little Thunder.

If you're dreaming of forming rock's next great power duo a la Local H, White Stripes or Black Keys, then a little something called A Little Thunder might be what you're looking for.

Designed by guitarist Andy Alt (the online marketing director for Steve Vai and co-creator, with Vai, of GuitarTV.com), the Little Thunder pickup replaces a traditional guitar humbucker and allows users to play guitar and bass simultaneously. The pickup adds a bass signal to the two lowest strings on an electric guitar but still leaves the signal of all six guitar strings intact.

The addition of the bass feature requires no physical modifications to the guitar: no drilling, routing or adding strings. Nor will guitarists need to replace 9-volt batteries or use MIDI. They just need to remove their existing humbucker, and - with about five minutes of installation time - they'll have the ability to push a button to activate A Little Thunder.

The three controls are on the custom-designed pickup ring: an on/off switch, a -1 or -2 octave switch and a polyphonic (two bass notes at once) or "low note priority" mode. (The pickup detects the lowest note being played and applies the bass effect only to that note.)

Because the technology is housed within the pickup, players will experience virtually no latency or tracking issues, which they might encounter with external technologies, such as octave pedals.

The Little Thunder Kickstarter campaign is now live, with a goal of raising $35,000 to go into production. Rewards for Kickstarter backers include a Steve Vai autographed 1987 Ibanez RG550 prototype; a trip to Disneyland with Drake Bell; guitar lessons with Adam Ross (Rihanna), Gretchen Menn, or Daniele Gottardo; the first serial numbers of the pickup; limited-edition design by artist and musician Trisha Lurie; and many more.

In the exclusive video above, you can watch creator Alt demoing A Little Thunder with a loop pedal while jamming with drummer Thomas Pridgen. In the video below, watch artists such as Jonny Two Bags (Social Distortion), Kirk Douglas (the Roots), Adam Levy (Norah Jones), Brad Oberhofer (Oberhofer) checking out the pickup.

"Prototypes of A Little Thunder have been incredibly fun and addicting to experiment with," says Alt, "and now it's going to be available to anyone who wants to go deep into the depths of their guitar's dark but beautiful soul. Metal players can now get super-heavy sounds without having to relearn an instrument that has more strings, jazz players can subtly add bass to comp along with their lines, and singer-songwriters will sound fuller. My favorite configuration so far is the duo setting, where two people will now sound like much more. The most exciting part is to see what musicians will do with A Little Thunder."