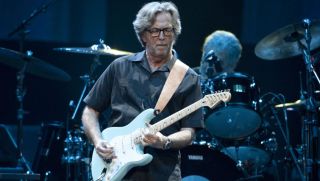 RollingStones.com, the band's official website, reports that 'Slowhand' himself will be in attendance at the show, making a guest appearance with the ageing rockers at their last 50 And Counting UK tour date. Florence Welch (of Florence And The Machine) is also set to guest at the show.

Earlier in the week, at the group's Sunday show (25 November), another legendary figure in guitar music, Jeff Beck (who was asked to join the 'Stones following the death of guitarist Brian Jones), also made an appearance, as did Mary J Blige, and former-Stones Bill Wyman and Mick Taylor.

Following the London shows, the band will head to the US for three dates, including Brooklyn Barclay Center on 8 December and Newark Prudential Center on 13 and 15 December.